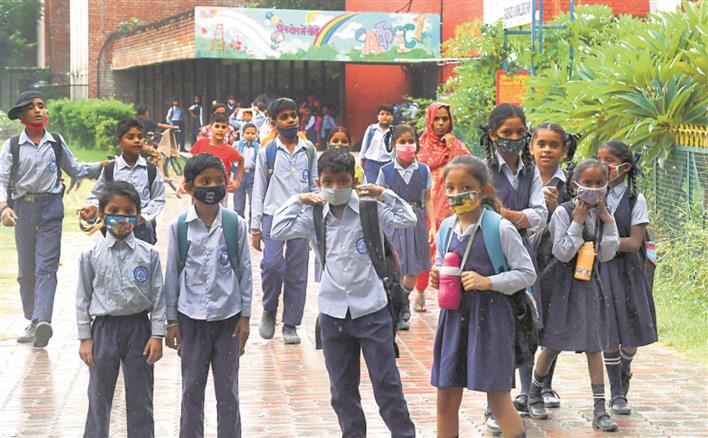 Primary class students come out of a school in Sector 25, Chandigarh, on Monday. Pradeep Tewari

The first day of reopening of schools for primary school students saw a tepid response as only 15 per cent students of classes I to IV turned up at government schools today.

We were waiting for clearance from parents. For classes I to IV, around 80 per cent parents have agreed to send their children to school. We are most likely going to start the classes from October 25. — HS Mamik, President, ISA

The schools had reopened for Class IX onwards in July. Classes VII and VIII were restarted in August and classes V and VI were reopened in September.

Wearing of mask, sanitisation of the campus, proper social distancing and other precautions were ensured. Students attended classes with the consent of their parents. The classes are being held both in the offline and online modes.

HS Mamik, president of the Independent Schools Association (ISA), said, “We were waiting for clearance from parents. For classes I to IV, around 80 per cent parents have agreed to send their children to school. We are most likely going to start the classes from October 25. The students from the senior wing are still turning up in low numbers and the figure is hovering over 40 per cent only. They are satisfied with online teaching and don’t want to come to school. The government should keep only one option of teaching so that more students return to school.”