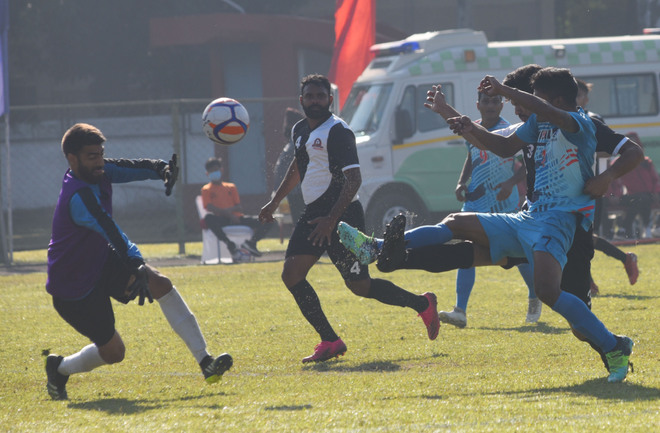 A match in progress between Services and HP in Sector 7, Chandigarh, on Sunday. Tribune photo: Pradeep Tewari

Services pumped in three goals against Himachal Pradesh (HP), while city lads had to satisfy with a 1-1 draw against Jammu & Kashmir on the opening day of the North Zone (Pool) Santosh Trophy at the Sector 7 Sports Complex here today.

In the opening match, Services, who are tournament favourites, started strongly against HP lads. The Services team played under traditional (4-4-2) format, while HP lads, eyeing to stop Services from winning the match, played with an extra defender (5-4-1).

Services posted the first goal in the very first minute of the match. Moirangthem Ronaldo Singh scored the goal to dishearten HP lads.

Singh’s goal helped Services gain momentum and the side held a majority of the possession. Just before the lemon break, Singh netted the second goal to put Services ahead by two goals. In the second half, HP lads tried to lift their morale and changed strategy, but Services midfielders proved to be too good for them. In the 70th minute, Services got their third goal as Vivek Kumar put the ball over the goal line. Services, thereafter, successfully defended the lead and closed the match in their favour. Singh was named the player of the match for scoring a brace in the Services’ win.

In the second match, the host team managed to stop Jammu and Kashmir (J&K) from winning the match. The local lads played to a 1-1 draw. While the J&K lads started the match with a 4-4-2 format, the local team had their mid-field packed as they started with seven midfielders, two defenders and one striker.

The visitors were off to a good start as they claimed the lead in the 7th minute. Shakir Ahmed Sheikh stunned the local lads with a beautiful strike. Chandigarh had their chances of comeback, but none went fruitful. The local team, however, got its first breakthrough in the 37th minute as Sanvir Singh netted the goal. In the second half, both tried to score the lead. However, the score remained unchanged.