Incentives for the rich, raw deal for the poor : The Tribune India

Incentives for the rich, raw deal for the poor

In India, while the industry is lobbying hard to seek further tax concessions to the tune of Rs2.5 lakh crore by bringing the corporate tax slab to a low of 15%, an Oxfam study had earlier pointed to the creation of 117 million jobs if the richest 1% globally were to be made to pay an additional tax of just 0.5% over the next 10 years. If we look at it economically, this makes terrific sense. 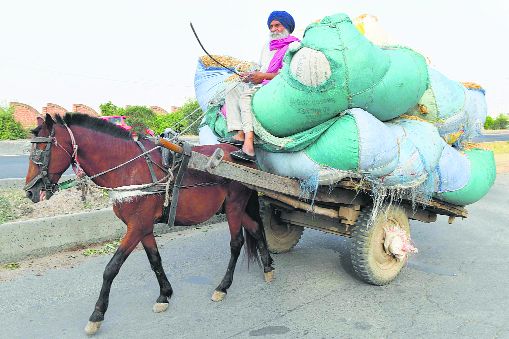 Big question: Why should public sector investment in agriculture continue to hover around 0.4% of the GDP when the sector employs roughly 50% of the population?

Former US Labour Secretary Robert Reich tweeted the other day: “America’s richest one per cent now owns half the value of the US stock market. The richest 10 per cent own 92 per cent. So when Trump says the stock market is the economy, know who he’s really talking about.” Well, Trump is not the only Head of State who believes that a booming stock market is a reflection of the state of the economy. The list of such leaders is pretty long. This shows how effectively credit rating agencies have drilled the idea into our minds.

Even on the day when India’s Finance Minister presents the annual Budget, all eyes are on the stock markets. When, in September last year, Nirmala Sitharaman announced a slew of measures to build up domestic demand in times of a slowdown, she presented a tax concession bonanza of Rs 1.45 lakh crore to the industry, reducing the basic corporate tax rate to 22 per cent, celebrations the next day were observed on the stock markets. Shares jumped by as much as five per cent, the highest in 10 years, as some media reports indicated. If only the same amount had been allocated for providing more money into the hands of the poor, stock markets would have remained subdued, but perhaps more demand could have been generated, thereby refuelling the economy.

Even now, when globally, the pandemic has left the economies bleeding, the stock markets are on a bull run, prompting Nobel laureate Paul Krugman to say there is something terribly going wrong. This is also evident from the fact that the top 614 of America’s billionaires increased their wealth by over $584 billion between March 18 and June 17 while more than 45.5 million Americans joined the unemployment queue in the same period. While much of the wealth increase is related to the Wall Street, economic bailouts and stimulus packages have helped transfer more money into the pockets of the stinking rich.

On top of it is the ‘printing’ of surplus money in the form of Quantitative Easing (QE). According to Fitch Ratings, global QE asset purchases are expected to touch $6 trillion in 2020. By bolstering the financial and property markets, this helps the rich become richer. But rarely have I seen the universities deliberating on the need to make QE work for the people. Why does it invariably fail to become part of the economics curricula or the media debates is beyond my understanding.

In India, while the industry is lobbying hard to seek further tax concessions to the tune of Rs 2.5 lakh crore by bringing the corporate tax slab to a low of 15 per cent, an Oxfam study had earlier pointed to the creation of 117 million jobs if the richest one per cent globally were to be made to pay an additional tax of just 0.5 per cent over the next 10 years. If we look at it economically, this makes terrific sense. To promote inclusive and sustainable growth, the UNCSD (United Nations Conference on Sustainable Development) tells us that creating employment and decent job opportunities will ultimately drive progress.

But then, why mainline economists have invariably failed to demand the imposition of a slightly higher corporate tax if it could lead to such huge employment opportunities continues to baffle me.

Why should nations continue to blindly pursue the outdated economic theory that workforce from agriculture needs to be shifted to the urban centres, primarily to ensure that companies don’t have to pay higher wages? Is it not a reflection of an ideological position?

“The public sector has an inescapable obligation towards health. The private sector alone cannot fulfil it. Of course, there will be public-private partnerships. Over the next five years, the Centre alone should be able to at least spend 2.1 per cent of the GDP on health,” NK Singh, chairman of the 15th Finance Commission, recently said.

Whatever the reason, even in normal times, the emphasis on public health should not have diminished. But if only the reports of the Finance Commission, for instance, were deliberated and hotly debated upon in the classrooms, would the future economists get a peep into how our financial policies lay the framework for declining public sector investments in social sectors, and also lead to stark socio-economic inequalities.

Still, the bigger lesson is that if Britain can spend 9.6 per cent of its GDP on public health, why should India not try to catch up with at least six per cent to begin with? Why should public sector investment in agriculture continue to hover around 0.4 per cent of the GDP (between 2011-12 and 2017-18) when the sector employs roughly 50 per cent population? Why should the poor continue to live on the margins while the rich are routinely provided with massive bank write-offs, tax cuts and subsidies packed in the name of incentives for growth? Why should we have socialism for the rich, and leave poor at the mercy of market forces? Why should growth economics come in conflict with nature?

These are not difficult questions, but need a rethink on economics.