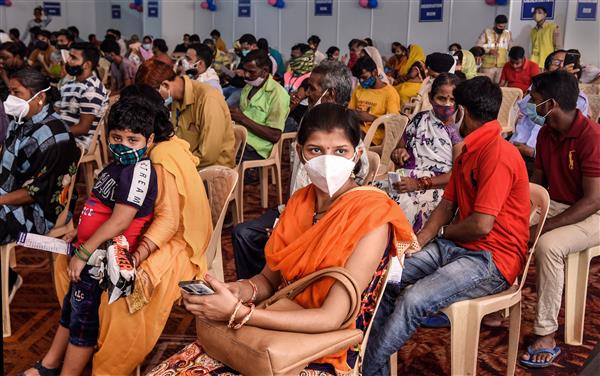 Beneficiaries wait in an observation room after receiving Covid-19 vaccine dose at a free vaccination camp organised by the Delhi government. PTI

The national capital reported 29 cases of Covid-19 and one death due to the infection in a day while the positivity rate stood at 0.05 per cent, according to data shared by the health department here on Sunday.

Delhi has recorded only two deaths due to the disease in October so far. Last month, five people had succumbed to the viral disease.

With the new cases, the coronavirus infection tally in the city climbed to 14,39,195. Of this, over 14.13 lakh patients have recovered from the disease. The death toll stands at 25,089.

According to the health bulletin, authorities conducted only 58,989 tests, including 43,135 RT-PCR ones, the previous day. There are 347 active Covid cases in Delhi, of which 97 are in home isolation. The number of containment zones stands at 102.

Delhi reported 30 cases of Covid-19 on Saturday and 39 cases on Friday.

In April and May, Delhi battled a brutal second wave of the pandemic that claimed a massive number of lives with the issue of oxygen shortage at hospitals adding to the woes.

The Delhi government has been ramping up health infrastructure to prevent a repeat of the crisis witnessed during the peak of the second wave of coronavirus in April and May.

According to government data, 1.90 crore vaccine doses have been administered in Delhi since the inoculation exercise started on January 16. Over 65 lakh people have received both doses. —PTI