Food security must not lull us into complacency

Being one of the most populous nations in the world, India needs a food system so robust and renewable that even if another pandemic occurs, the impact on the economy in general and this system in particular is minimal. We have to find alternative ways of producing more food. The nation which will be able to fill the bellies of its citizens while preserving its natural resources will be the winner. 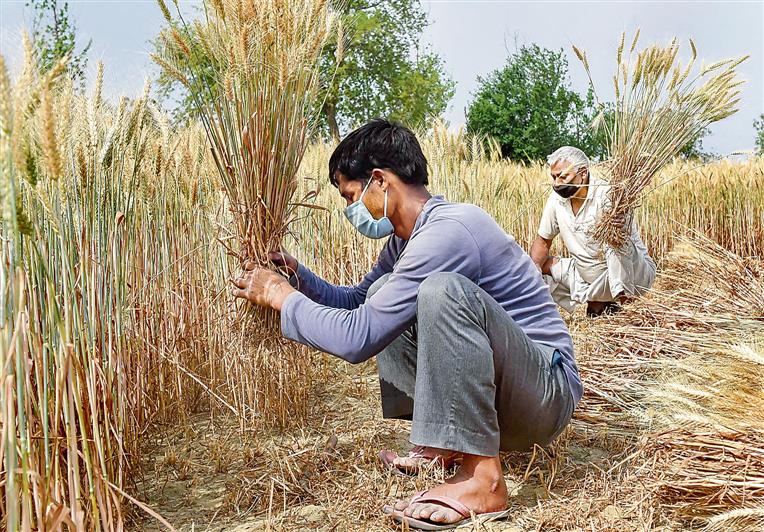 The Covid-19 pandemic has forced us to reorient our food and agriculture system.

THE robustness of Indian agriculture ensured that there was no food crisis during the over two-month-long lockdown due to Covid-19. Rather, India decided to feed the majority of its population free of cost till November 2020, and can do so for another one-and-a-half years even if there is no food production — thanks to the agricultural scientists, farmers and other stakeholders who are part of the Indian food and agriculture system. The Covid-19 pandemic has forced us to reorient our system so that the country always remains food-secure. Being one of the most populous nations in the world, India needs a food system so robust and renewable that even if another pandemic occurs, the impact on the economy in general and this system in particular is minimal.

In terms of food and agriculture, some Indian states are considered to be consumers while others are suppliers. The consuming states are mostly suppliers of labour to the producing states not only for agriculture, but also for labour-intensive industries. Normally, the supply of labour is from states with less economic activity to those with high economic activity. Although accurate data is hard to obtain, the Union Labour Ministry’s statistics put the number of migrant labourers in India at over 4 crore. As per Census 2011, the number of internal migrants in the country was 13.9 crore. However, this number also includes women who migrate due to marriage or with their migrant husbands. UP, Bihar, MP, Chhattisgarh, Jharkhand, Rajasthan, West Bengal, Odisha and the North East contribute the maximum migrants. Covid-19 triggered the reverse exodus of lakhs of labourers from work sites. According to one estimate, nearly 60 lakh migrant workers were seen crossing state borders during the pandemic. This frantic march of labourers towards their home states was mainly due to the fear that most of them would run out of food before the end of the lockdown. In addition, over 90 per cent of them had already lost one to three weeks of work, which caused financial insecurity too.

Though the overall supply situation and the prices of essential food items did not appear too worrisome, in the longer run, adverse effects were seen in six cases. One, the upheaval affected harvesting, collection and marketing of foodgrains, fruits and vegetables at the farm level. Two, the fall in the prices of a range of commodities in agriculture. Three, if the return of migrant workers back to their workplaces does not happen even partially, agricultural and industrial operations are not going to gather pace, and thus a huge impact on economic growth may be seen in the near future. While some operations in selected areas may be done using machines and tools, the local shortage of machines or its hiring centres, repair shops and spare parts is affecting the activities, leading to many machines lying unused. Labour shortage was also being experienced in most milk processing plants, cold storages and warehouses. Four, supply chains were disrupted across the country for a range of commodities, causing huge post-harvest losses even at the supplier’s level.

Five, the youth, even in rural areas, do not want to work in the agricultural fields. It is difficult to find labourers for farm operations even in villages. In the longer run, the country is going to face a labour crunch in agricultural and industrial sectors. Six, our cultivable land and water availability are shrinking, but we will have to feed a population that is estimated to reach 1.7 billion by 2050 under adversely changed climatic conditions. Policy-makers have to think of ways and means to tackle these situations on an immediate and long-term basis.

During his interaction with sarpanches on Panchayati Raj Day (April 24) this year, Prime Minister Narendra Modi said the Covid-19 situation had taught us to be self-reliant. Every district and panchayat have to become self-reliant for ushering in Atmanirbhar Bharat. The mismatch of economic activities of different states and different districts within states has to be addressed. For labour-surplus states, we have to create agricultural/rural raw material-based industries so that farmers or their dependents don’t depend solely on agricultural activities. Each family must have at least one or two members doing a salaried job, while states having labour shortage may go towards fully mechanised precision agriculture and post-harvest activities, and online marketing systems. Indian agriculture now requires a major emphasis on agricultural engineering and post-harvest processing.

In labour-surplus states, we need to set up Intensive Economic Zones with agro-processing centres (APCs). One APC with an investment of about Rs 30-40 lakh can give direct employment to 4-6 persons with a net profit of up to Rs 1 lakh per month. If so, we also need to establish storage godowns at the panchayat level (which will help in reducing grain movement during the pandemic), food quality testing laboratories, a market yard for selling locally and in the open market through digital platforms. Farm machinery and post-harvest equipment custom-hiring centres, equipment repair and service centres etc. may come up in these areas and create jobs. If one such APC is established in each village, labour movement may get considerably reduced. No one wants to leave his birthplace if his basic requirements are met locally. We have to generate work for a majority of the people as an additional source of income.

In labour-deficient states, we need to lay emphasis on mechanisation. Efforts have to be made to use robotics not only for agricultural operations for foodgrains but also for fruits and vegetables. The Internet of Things, machine vision system, deep machine learning, sensor-based maturity, harvesting and ripening stage determination with big data analytics and decision-making system need to be developed for Indian agriculture.

The world now needs to be ready to face a Covid-like situation on the agriculture and food front too. Generally also, we need to cut down on the use of land, labour, water and fertilisers. World Food Prize winner Dr Rattan Lal has rightly said: “We need to reduce land under cereal crops, and water used for irrigation has to be brought down by one-third.” So, we have to find alternative ways of producing more food. The nation which will be able to fill the bellies of its citizens while preserving its natural resources will be the winner. For such a situation, we have to start working on developing engineered food (manufacturing food in factories without cultivation). Processes and machinery have to be developed to convert any biomaterial, weeds, grass, fallen leaves, tree barks and crop residue into food for humans. An interdisciplinary platform comprising agricultural engineering, electronics, computer applications, robotics, chemistry etc. should be established to achieve this long-term goal and for tackling pandemics and climate change. If we will not start now, some other will surely do, and we will be left behind.