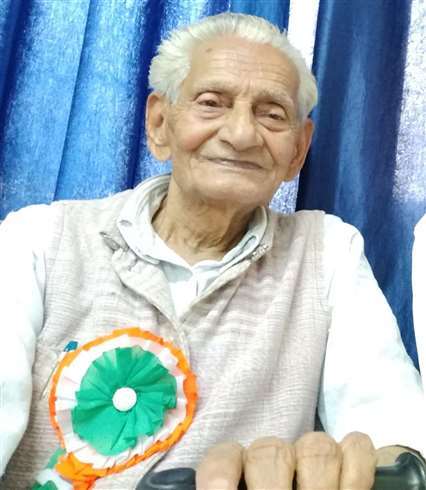 Satya Mitra Bakshi, 94, breathed his last at his home in Una city.

Satya Mitra Bakshi, a veteran freedom fighter, died at the age of 94 at his home in Una city today. He was the son of Baba Laxman Das and Mata Durga Devi, the revolutionary couple who had led the freedom struggle from the region.

In 1942, Satya Mitra Bakshi was jailed for nine months and kept in the Lahore jail. After release from the jail, he coordinated with other revolutionaries from Gandhi Ashram at Oel village of Una district as well as from their house in old Una city.

Satya Mitra was a member of the Himachal Pradesh Freedom Fighters Welfare Board and had been regularly donating all his pension towards the welfare of underprivileged people, besides the education of girls. Family sources said the cremation would take place here tomorrow.

Meanwhile, in a statement issued here, Rural Development minister Virender Kanwar and Chairman of the State Finance Commission Satpal Singh Satti have mourned the demise of the veteran freedom fighter.

Satya Mitra’s father Baba Laxman Das got active in the freedom struggle in 1905 after taking premature retirement from the police force where he was a Sergeant. His wife Durga Devi also joined him and together, they worked with revolutionaries such as Lala Lajpat Rai, Bhagat Singh’s uncle Sardar Ajeet Singh and Dr Satpal, who had organised the Jallianwala Bagh meeting in Amritsar.