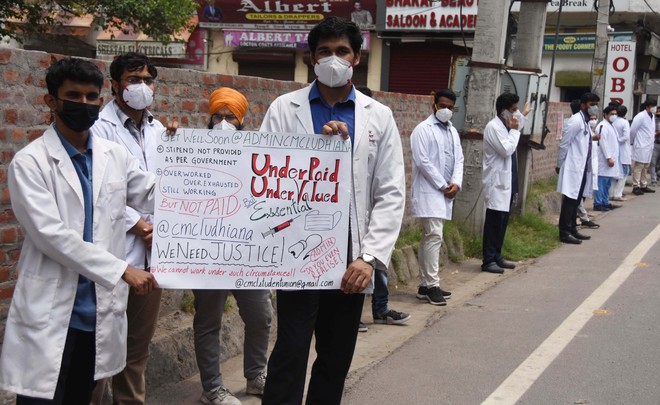 MBBS students of the Christian Medical College and Hospital hold a protest in Ludhiana on Tuesday. Tribune photo: Himanshu Mahajan

MBBS interns of Christian Medical College and Hospital today staged a protest against the hospital administration for not providing them increased stipend as per the government rules.

Interns of the 2016 batch said the protest was a wake up call for the authorities as they are flouting government rules. Protesting students demanded stipend according to the rules of the state government. “The state government has asked to give a stipend of Rs15,000 per month to MBBS interns but our institution is still giving Rs7,800. Our demand is that we should be paid Rs15,000 as per government rules. Talks with the authorities in this regard have failed to achieve any results. We were left with no other option except staging a protest,” said a student, on the condition of anonymity.

The student further added that in the final year of MBBS, students need to pay half fee but they were charged full fee. “We were not given any relaxation even during the pandemic. We were charged full fee by showing guidelines of the state government but when it comes to paying us, they do not want to follow the rules. We want stipend according to the state government rules,” said another student.

He further added that they are performing all the medical duties like frontline workers but their institute doesn’t care two hoots about them.

Final exams of the students were over by March 30 and their result was declared on April 10 and they joined their internship on April 12. They are yet to get their first stipend and want they should be given the full amount of Rs15,000. Earlier, batches were also getting Rs7,800 only.

Principal Dr Jeyaraj D Pandian said the CMCH was a charitable, private institution and they cannot afford a stipend as per the central or state government.

“The stipend of the students is still due and even before the due date, they have started protesting. The country is facing such a difficult time and they are thinking about money,” said Dr Jeyaraj.