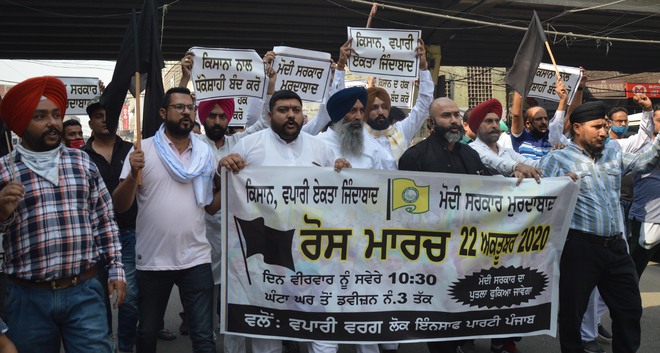 LIP workers during a protest in Ludhiana. Photo: Inderjeet Verma

A group of Lok Insaaf Party (LIP) workers staged a protest against the Narendra Modi-led Central Government and demanded to withdraw the farm laws at the earliest. The protest was led by members of the vyopar wing of the party.

They also burnt the effigy of the Prime Minister and raised slogans against the Centre to mark their protest against the farm Acts.

He alleged that the farm laws were against farmers and traders and these would benefit only big corporates.

A number of traders associated with the vyopar wing of the party participated in the protest. They criticised the Central Government for framing the farm laws and demanded to revoke the same at the earliest. — TNS