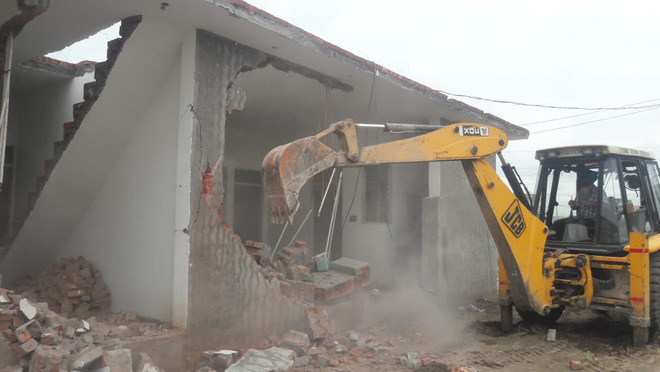 An illegal structure being demolished at an unauthorised colony during a drive in Ludhiana. Tribune Photo

‘People warned not to purchase properties’

Joint Commissioner, Municipal Corporation, Kulpreet Singh, who was present at the colony site during the demolition drive, said a few persons came to see houses but they were warned not to purchase houses or plots in illegal colonies.

Joint Commissioner, MC, Kulpreet Singh said they took action against Connaught Palace Colony in Zone C once again and demolished four newly constructed houses in the colony. The Joint Commissioner, who was present at the colony site during the demolition drive, said a few persons came to see houses but they were warned not to purchase houses or plots in illegal colonies.

Apart from this, an illegal colony opposite the Eastman factory in Giaspura was razed while two illegal shops were demolished on Lohara Road in the Zone C area, he said.

He said, “In Zone A, sewer lines of illegal colonies on Jassian Road and Kakowal Road were dismantled. Besides, three illegal industrial constructions were demolished at Manna Nagar, Azad Nagar and Bahadur Ke Road, while 17 shanties were razed in a slum area.”

In Zone B, action was taken against two illegal colonies, including New Shera Colony. The sewer lines were dismantled in these colonies, he added.

Kulpreet Singh said in Zone D, they took action against an illegal colony near Sharmanji Vatika, Barewal. He said some illegal shops were demolished on Churpur Road.

He said the drive would continue against the illegal colonies and constructions in the city in the coming days.

A large number of illegal constructions have come up in the city in recent years, while thousands of commercial activities are going in many residential areas.

A city resident, Baljeet Singh said the MC should install status boards at the sites of all approved/authorised colonies with displaying information about approval number and detailed colony map with boundary lines. Warning boards must be installed at the sites of illegal colonies.

“The civic body should also display lists of approved colonies at its offices and web portal. Awareness should be created among people not to buy any plot or house in any illegal colonies. In every ward, helpline numbers for registration of complaints regarding illegal colonies and constructions must be displayed on big boards to curb the menace,” he said.