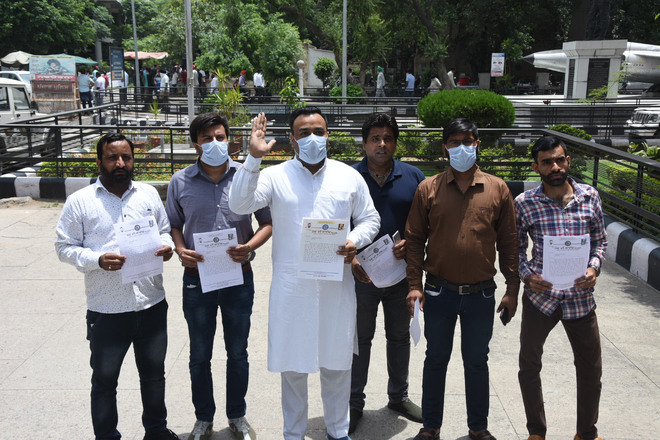 Members of an NGO, Save the Life, during a protest in front of the DC’s office in Ludhiana. Photo: Ashwani Dhiman

Members of different NGOs, including the Wake Up Ludhiana and Council of Engineers, staged a protest in front of the office of the Municipal Commissioner at Zone-D, Sarabha Nagar, Ludhiana against the MC authorities for allegedly ignoring the orders of the National Green Tribunal Act (NGT) regarding trees. The members accused the civic body officials of failing to remove the interlocking tiles around trees.

Harpreet Soin, president, Wake Up Ludhiana, and Amrita Mangat said, “When concrete is placed over the roots, it damages critical root structures. Covering this zone with concrete inhibits the tree’s ability to take in water and oxygen. As a result, laying concrete under an existing tree may result in the tree’s death,” they said.

The protesting members said due to lack of nutrients because of chocking of their roots, the grip/strength of roots of matured trees with the earth decreases and such trees are more likely to fall during wind storm.

“The officials concerned of the MC, GLADA as well LIT, without consulting the horticulturist and environment experts about the effect of concrete around bottom of trees, are continuously covering the areas around the trees with concrete and fixing interlocking tiles (paver) over it” said, Kapil Arora and Mohit Jain of the Council of Engineers.

“A petition was filed with the National Green Tribunal against such unlawful act of the MC, LIT and GLADA. The Green Tribunal issued directions to all three departments to take remedial action to clear the roots of trees within 1 metre radius of bases of existing trees in Ludhiana but they failed to follow the orders,” protesters said.

Gagnish Singh Khurana and Kuldeep Singh Khaira saidt they had submitted copy of orders to the Municipal Commissioner. But, despite numerous reminders, the orders were not implemented by the MC, they alleged.