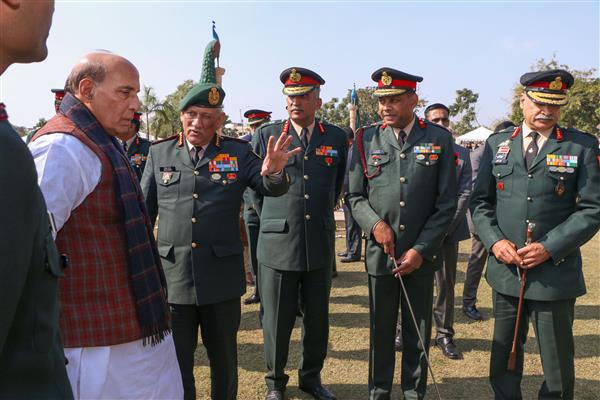 The Department of Military Affairs (DMA) headed by the Chief of Defence Staff, General Bipin Rawat prepared a list of 101 items for which there would be an embargo on the import beyond the timeline indicated against them. PTI file

The Ministry of Defence has come out with a ‘Negative Import List’ of 101 types of military equipment, weapons and ammunition which will be progressively barred from imports starting December 2020.

The list also includes, wheeled Armoured fighting vehicles (AFVs) with indicative import embargo date of December 2021, of which the Army is expected to contract almost 200 at an approximate cost of over Rs 5,000 crore.

Prime Minister Shri @narendramodi has given a clarion call for a self-reliant India based on the five pillars, i.e., Economy, Infrastructure, System, Demography & Demand and announced a special economic package for Self-Reliant India named ‘Atamnirbhar Bharat’.

Similarly, the Navy is likely to place demands for Submarines with an indicative import embargo date of December 2021, of which it expects to contract about six at an approximate cost of almost Rs 42,000 crore. For the Air Force, it is decided to enlist the LCA MK 1A with an indicative embargo date of December 2020. Of these, 123 are anticipated at an approximate cost of over Rs 85,000 crore.

The embargo on imports is planned to be progressively implemented between 2020 to 2024.

The Department of Military Affairs (DMA) headed by the Chief of Defence Staff, General Bipin Rawat prepared a list of 101 items for which there would be an embargo on the import beyond the timeline indicated against them.

This offers a great opportunity to the Indian defence industry to manufacture the items in the negative list by using their own design and development capabilities or adopting the technologies designed and developed by Defence Research and Development Organisation (DRDO).

The list is prepared by MoD after several rounds of consultations with all stakeholders, including Army, Air Force, Navy, DRDO, Defence Public Sector Undertakings (DPSUs), Ordnance Factory Board (OFB) and private industry to assess current and future capabilities of the Indian industry for manufacturing various ammunition/weapons/platforms/equipment within India.

More such equipment for import embargo would be identified progressively by the DMA in consultation with all stakeholders.

Taking cue from that evocation, the Ministry of Defence has prepared a list of 101 items for which there would be an embargo on the import beyond the timeline indicated against them. This is a big step towards self-reliance in defence. #AtmanirbharBharat