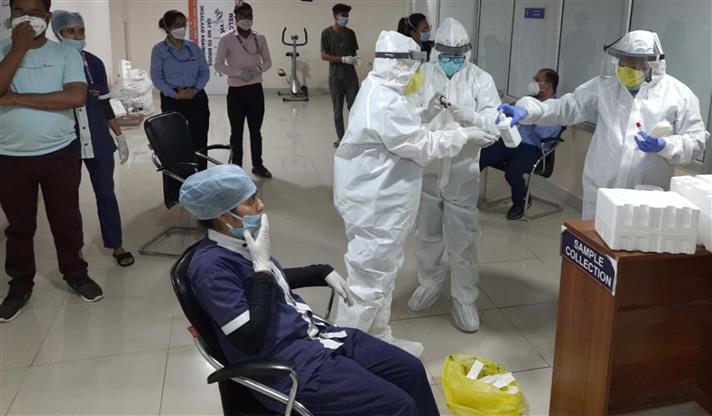 Healthcare workers take swab samples of the staff at a private hospital staff after a pregnant woman tested positive for the COVID 19 in Patiala on Friday. Tribune photo: Rajesh Sachar

Seven of Jalandhar's eight new cases were contacts of already diagnosed case. One was a new case with a travel history.

Ten of Amritsar's 12 new cases had travel history, one was a contact of an already detected case and the last was a case of severe acute respiratory infection.

Of Pathankot's five cases, three were contacts of an already diagnosed case, one was a case of influenza-like illness and the last was a self-reported new case.

Moga's two new cases were people who recently returned from abroad. Of Ludhiana's four cases, three had travel history and one was a case of severe acute respiratory illness.

All cases from SAS Nagar, Patiala, and Gurdaspur had travel histories.

Meanwhile, Jalandhar reported another case later in the evening. A man who returned from Mumbai recently tested positive on Friday.

Bathinda also reported five new cases, two of whom have a recent travel history and the third is an anganwadi worker, Deputy Commissioner B Srinivasan said.

The last person was recently arrested for an offence.

The district now has only five active cases.

Civil surgeon Amrik Singh said those who tested positive have been moved to civil hospital. All those who came in touch with them have been quarantined and will be tested soon, he said.

Neither Jalandhar's new case or Bathinda's have been added to the official state tally yet.