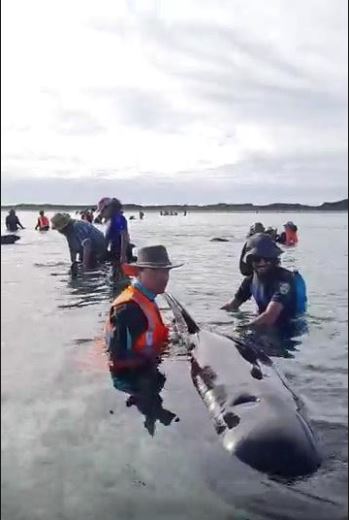 More than a dozen pilot whales have died and many others remain stranded near a narrow sand spit at the northern tip of New Zealand's South Island despite efforts to move them out to sea, authorities said on Tuesday.

After a mass stranding at Farewell Spit on Monday, the whales were walked out at high tide that night, only to be found at the remote beach again on Tuesday morning.

Some 28 were alive, while 15 were known to have died. Some of the stranded whales have started swimming away but others are milling around not far from shore, a spokeswoman for New Zealand's Department of Conservation said in a statement.

"At this stage, it's unclear whether the whales that are offshore from the Spit might re-strand in the outgoing tide or swim off. We should know in the next hour or so," she said.

Rescue workers were in the water trying to encourage the whales to swim off. About 50 people including volunteers from Project Jonah, an environmental organisation that specialises in the protection of marine mammals, researchers, government officials and the general public were at the spot trying to help re-float the whales.

Last year, nearly 100 pilot whales and bottlenose dolphins died in a mass stranding on the remote Chatham Islands, about 800 km (497 miles) off New Zealand's east coast. Mass strandings are common in New Zealand, and have occurred throughout recorded modern history. Why it happens is a question that has puzzled marine biologists for years. Reuters