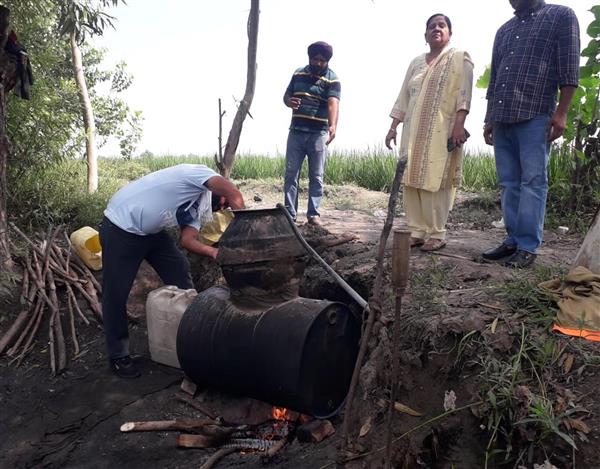 Excise officials raid an illegal liquor still at a village in Amritsar on Friday. Tribune photo

Teams of the Excise Department raided the premises of liquor contractors and seized illegally stocked liquor from their possession here on Friday.

He said 70 cartons of English and foreign-made liquor kept illegally were recovered from the premises of Dalbir Singh Pannu based in New Amritsar. “The licensee did not even enter this lot in the register,” he said.

The second team confiscated 25 cartons of liquor from the vends of Amrik Singh Bajwa situated on Tarn Taran Road. He said these cartons had no hologram and these were not entered in the register. Another team seized 128 bottles of English liquor and 108 bottles of beer from a place adjoining Hyatt Hotel on the GT road. The premises was being used as an office by Dalbir Singh Pannu and the stock was kept without a permit by the contractor, said the Assistant Commissioner.

Hanumant Singh said the teams seized the liquor and initiated legal action against the accused and firms. The raids were conducted in the areas adjacent to the Beas and Ravi to stop the sale of illegal liquor and thousands of litres of liquor was destroyed. He said in the coming days other licensees would also be checked by teams.