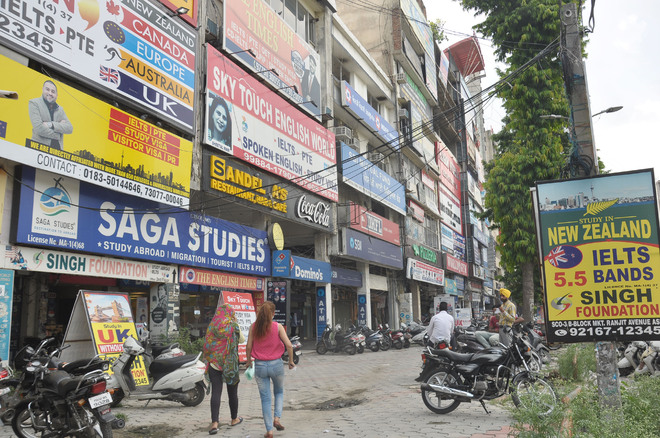 The IELTS coaching centres and immigration service providers in Amritsar are bearing the high overhead expenses without any scope for business till November. Photo: Sunil kumar

The impact of the global pandemic on immigration and overseas education sector has been devastating. With several dreams of studying abroad either shattered or delayed because of suspension or hold-up in visa processing and grants by countries, the immigration service providers and students are thrown in a conundrum and without any clarity.

With the waiting period for reopening of IELTS coaching centres and immigration service providers extending on, the situation is turning grimmer, feel industry insiders. “60% of immigration industry in the state has been pushed towards the brink of shutting down due to the Covid-induced lockdown. The related industry including the IELTS coaching centres are bearing the maximum brunt. Though, several countries have started visa processing with conditions, the current situation makes it tough to survive,” says Amit Sharma, a recognised immigration consultant from city.

It’s a well-known fact that Punjab is a market with a high number of local immigration service providers. With the average intake of students migrating to countries like Canada, US, UK, Australia and New Zealand nosediving due to pandemic, the sector seems cornered.

“Except for Australia and UK, no other country popular for immigration in Punjab, is granting visa. The visa processing for students who had already applied or were studying in the particular country, are being offered with conditions. So, it is going to be a challenge to survive,” tells Amit.

Vinod Sharma, director, Kiwi Studies and an immigration consultant, shares that the surplus capital and reserves are only a temporary solution. “New Zealand recently announced that they will be suspending visa services for three months.

Other countries too do not present a very hopeful picture. In such a case, the immigration providers are surviving through surplus capital and no scope of revenue generation at least for few more months.” He says that almost 25,000 research and PhD scholars are waiting for their visa.

Despite the challenges, Amit feels that the situation will improve soon. Though, the number of students applying for foreign universities is on the way down, the ones already in process are being provided support from the country-specific immigration bodies. “Most foreign universities are sending offer letters, urging students to attend the initial semesters online, without affecting the student’s studying rights in that country,” he says. This is a big respite to students who will be saving big on cost of living expenditures they were bearing. Also, it will prepare them easily for the transition to online education popularly followed in foreign universities.

He is greatly optimistic of industry’s chances of gathering steam once the visa processing reopens. “Students are eager to migrate. Countries that get maximum applications from students from Punjab are already offering alternatives,” he shares. Australia is another country eager to process visa for students. “With no Chinese students coming in due to Covid-19, the biggest market for them is India. So, it will be a good time to apply for visas once the process starts and it will be easy to get approval,” he adds.

Vinod’s thoughts on the topic are also alike. “The universities in New Zealand alone lost $400 billion of revenues due to lack of foreign students during the first quarter. With such high stakes, foreign universities will be eager to offer relaxations and support to students once the process begins again,” he says.

No word on coaching centres