House meet stormy; graft charges against Commissioner to be probed

AMRITSAR:The allegations of corruption against senior MC officials and councillors made the general house meeting a stormy affair here on Friday. 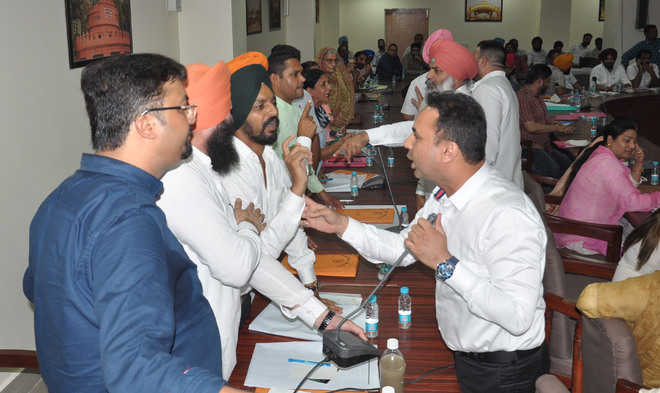 The allegations of corruption against senior MC officials and councillors made the general house meeting a stormy affair here on Friday. The meeting, which lasted five hours, discussed various cases and demanded an explanation from MC officials.

Responding to several queries, Mayor Karamjit Singh Rintu said the services of the Commissioner were not satisfactory. “He didn’t respond to my official communication. Today, he missed the meeting, a message to this effect was conveyed by him to the House around half an hour before the start of the meeting. It is not a matter of commissioner or mayor, we are public servants and answerable to the public.”

Deputy Mayor Younis exposed the malpractices in several departments. He demanded an explanation of Municipal Health Officer (MHO) Dr Ajay Kanwar regarding the recovery from the slaughterhouse. Younis claimed that the MC had recovered a small amount as the slaughtering fee as major slaughterhouses were under the MC jurisdiction. The Mayor has constituted an inquiry committee under councillor Mahesh Khanna to investigate the matter.

Younis raised a query about the contract of Rs 9 lakh to plant saplings, which have not been planted. Younis raised a query about the land given to telecommunication companies on low rents. He claimed a clear violation of rules. The Deputy Mayor also demanded an explanation from the property tax wing and claimed that the number of tax payers had not increased and there was a major scandal in it. Mayor Karamjit Singh Rintu instructed to constitute separate committees to investigate all the cases highlighted by Deputy Mayor Younis.

Senior Deputy Mayor Raman Bakshi raised concerns over the missing leased property files. “It is unfortunate that small embezzlements are being highlighted and the properties worth crores have been grabbed by misplacing lease record. Bakshi claimed that the manual sweeping company hired by the MC is overcharging. He has shown the orders of the state government to terminate the services of the company. The company belongs to BJP leader Manjinder Singh Sirsa and the MC should terminate its services.” He raised voice against the land given to telecommunication companies on rent.

Most of the councillors were mum on the illegal construction of hotels. Mahesh Khanna and Jagdeep Singh Narula alleged that officials of the MTP wing took bribe for allowing the construction of illegal buildings. Sandhya Sikka, leader of the Opposition in the House, raised an objection to the reconstruction of the demolished illegal buildings. She questioned the encroachment done by Bansal Sweets at Lawrence Road. Sandeep Kumar, councillor of Ward No.18, said how a five-storey commercial building was constructed in a residential area and no one took action on his repeated complaints.

Controversy over go ahead to agenda

There were a total of 22 proposals in the agenda. The councillors said 11 supplementary proposals and 18 proposals were tabled during the meeting. After a five-hour-long discussion, a large number of Congress councillors left the meeting. Irked over the Congress men’s attitude, the SAD-BJP councillors also walked out of the House proceedings without giving their nod for the proposals. Out of the 85, only 32 councillors were present at the meeting when the Mayor asked for the approval to agenda items. Sandhya Sikka, leader of the opposition, said, “At least 66 per cent attendance is required to pass the agenda. Technically, no proposal has been passed in the meeting.” Mayor Karamjit Singh Rintu said all the proposals had been passed unanimously. “A proposal about the solid waste management would be discussed at a meeting. BJP councillors were making a drama of it,” added Mayor. Most of the proposals were related to development of wards and sanitation.

Every third councillor claimed that people were getting contaminated water. The BJP-SAD councillors showed the contaminated water collected in bottles. The councillors demanded a solution to the ubiquitous presence of stray cows, dogs and pigs. In the absence of desilting this year, the sewerage systems remained choked in several areas.

Demanding regular jobs, the sewermen raised slogans outside the hall, where the general house meeting was being conducted. Around 190 sewermen, who have been working for years, were assured of the regularization of their services. They have been demanding the issuance of a notification to regularise their jobs.

Governor Andrew Cuomo had announced on Monday that the cityw...