‘Fearless Girl’ to face the bull until next year

A bronze figure of a girl facing down the famous bull statue on Broadway will remain there until 2018, it has been announced. 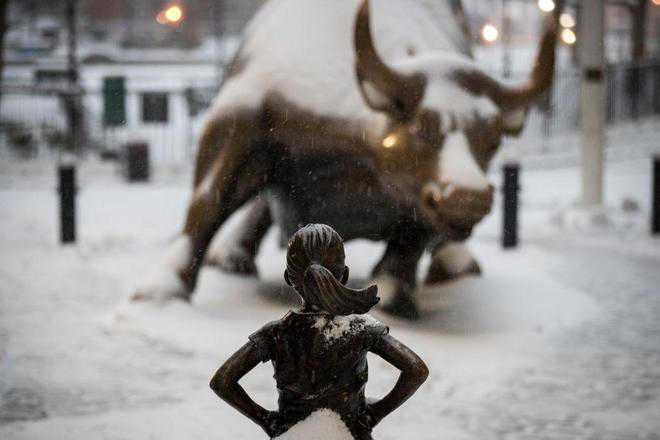 Symbol of resilience: The Fearless Girl statue faces down the Charging Bull

A bronze figure of a girl facing down the famous bull statue on Broadway will remain there until 2018, it has been announced.

Fearless Girl was installed opposite Wall Street’s iconic Charging Bull in March by State Street Global Advisors, in honour of International Women’s Day and as a plea for US financial firms to employ more women at senior levels.

Designed by Kristen Vibal, the statue was an instant hit and has attracted thousands of tourists ever since.

While it was only intended to be kept in the spot for 30 days, several petitions were launched in the hope that the statue would remain in place for longer.

Rep. Carolyn Maloney, who was among leaders calling for the artwork to remain, said: “This statue has touched hearts across the world with its symbolism of the resiliency of women.”

City Hall has since confirmed that Mayor de Blasio has agreed to keep Fearless Girl in her current location until February 2018, under the Department of Transportation’s art programme.

The mayor said in a written statement: “In her short time here, the Fearless Girl has fuelled powerful conversations about women in leadership and inspired so many.

“Now, she’ll be asserting herself and affirming her strength even after her temporary permit expires — a fitting path for a girl who refuses to quit.”

It had attracted some criticism, however, by the Charging Bull artist Arturo Di Modica, who has argued that it is nothing by a publicity stunt by State Street — reportedly threatening to sue the company for copyright infringement if it is not moved after its scheduled date of 2 April.