Salute to the reel heroes

Shah Rukh Khan made us fall in love with him all over again when he played Squadron Leader Veer Pratap Singh in Veer Zaara. He also played an Army officer in Jab Tak Hai Jaan. 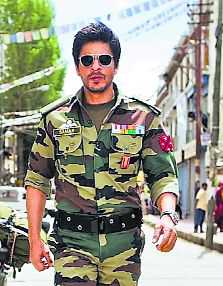 National Award winner Vicky Kaushal made the entire nation chant How Is The Josh” as Major Vihaan Singh Shergill in Uri. He will soon be seen in uniform as Field Marshal Sam Manekshaw. The film is helmed by Meghna Gulzar.

Big B made his Bollywood debut as a man in uniform. He was seen as police inspector Vijay Khanna in Zanjeer. Post that he has played the uniformed officer many times in his career and his get-up in Major Saab was unbeatable!

Sidharth Malhotra, who played the role of an Army officer for the first time in Neeraj Pandey’s Aiyaari, will once again be seen in uniform in Vikram Batra’s biopic. The actor says, “My grandfather was a proud Army officer. His sacrifice taught me to respect what life has given you. His courage taught me to stand by my choices.

Man on duty Ajay Devgn
Till now, Ajay Devgn has played the role of police inspector in more than five films. These include Naajayaz, Gangaajal, Insan, Aakrosh, Singham and Singnam Returns. As an honest, diligent and honoured officer, Ajay did full justice to the khaki uniform. Time and again, he is seen fighting against corruption, crime, nepotism and inefficiency like a true man on duty.
Screen presence Akshay Kumar
Akshay Kumar is probably one actor who has played the role of an Army, Navy, Air Force as well as police officer on screen. The Rowdy Rathore actor, who received his first National Award for Rustom, will now be seen in uniform once again in Rohit Shetty’s Sooryanvashi.
Proud feeling: John Abraham
John Abraham was first seen as an Army officer in Shoojit Sircar’s Madras Cafe. We saw him donning the Army officer’s uniform once again in Parmanu: The Story of Pokhran. John’s recent release Batla House also shows the actor in uniform. He plays the role of DCP Sanjeev Kumar Yadav, who was a part of the Batla House encounter.
SHARE ARTICLE