Thieves make off with ATM having Rs 3.6L

AMBALA: An ATM of Axis Bank, containing Rs 3.6 lakh, was uprooted and stolen from a kiosk in the Moti Nagar area of Ambala City in the wee hours of today, the police said here. 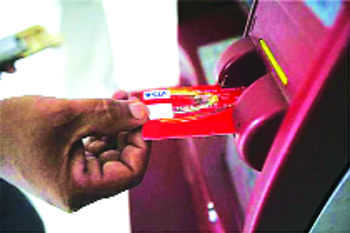 An ATM of Axis Bank, containing Rs 3.6 lakh, was uprooted and stolen from a kiosk in the Moti Nagar area of Ambala City in the wee hours of today, the police said here.

While CCTV cameras installed inside and outside the ATM kiosk could not capture the incident as the robbers sprayed some chemical on these, which blackened them, the CCTV footage from the vicinity revealed that the robbers were three in number and came in a Renault Duster vehicle.

According to the police, the thieves first tried to break open the ATM, but when they failed, they uprooted it and took it away.

According to the police, there was no security guard at the kiosk. The incident came to the fore when a PCR vehicle noticed the ransacked ATM kiosk around 3 am.

Forensic and cyber crime experts were pressed into service to find clues from the spot. However, no arrest or recovery was made till reports last came in.

The police have registered a case in this regard.