No respite from smog in sight 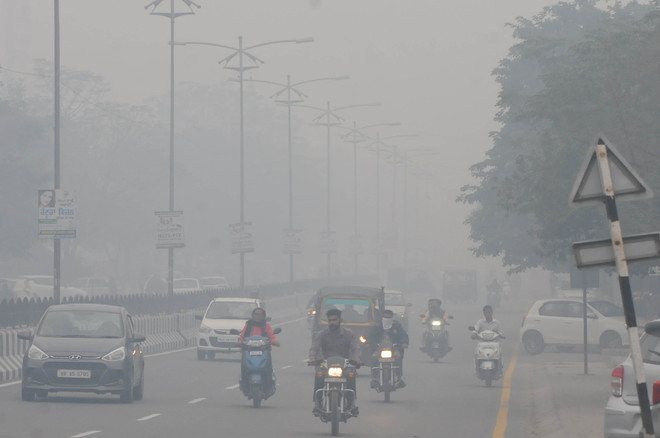 The city remained engulfed in a thick blanket of smog for the most part of the day on Thursday. Pawan Sharma

There seems to be no respite in sight for residents from excessive smog that has engulfed the city for the past three days. Poor visibility and increased pollution level has aggravated the risk of health problems for city residents.

The registration of cases by the PPCB and the police has barely deterred farmers from burning stubble. Even intensive awareness drives have failed to bear fruit as a result the region remains engulfed in a thick blanket of smog.

It has also made the visibility poor. Owing to excessive presence of smog, elderly and children are more vulnerable to health risks.

The flow of traffic has also got affected as vehicles move at low speed. The state government’s initiative to provide Rs 100 per quintal financial assistance to farmers has failed to convince them to do away with setting crop residue on fire.

Residents have been complaining of irritation in eyes and respiratory diseases. The current weather condition may prevail for the next few days as there is no sign of rain. Apart from chronic obstructive pulmonary diseases (COPDs), air pollutants that contain harmful carcinogenic agents are present in the air and can cause cancer.

City doctors say carbon particles, suspended in the air due to the burning of crop residue, could have serious health implications. They said elderly and children, who generally have a weak immune system as compared to adults, were more vulnerable to smog-related diseases.

The logjam between farmers and the government continues to pose problems for the residents in the district as there is barely any sharp decline in farm fire cases and smoggy weather has been taking toll on health of residents apart from throwing normal life out of gear in the city. Above all, it is polluting the environment.

Expressing their helplessness, farmers though admit that burning of paddy residue affect health of residents, they claim of not having any viable alternative. Farmers say that the government hasn’t made adequate arrangements by providing a viable alternative to stubble burning. “A meagre compensation by the government at this juncture will merely serve nothing more than a cosmetic solution now,” they say.

A number of road accidents have been reported in the district due to smog.