Meet Kartik Sharma, a model and the Brand Ambassador of ‘Big Projects’ 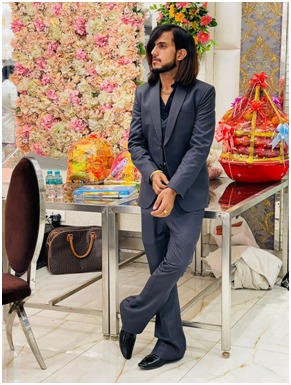 There’s no secret to success and this holds true for every field including Modeling. Getting an opportunity to walk on the ramp for any prolific fashion designer or getting clicked by paparazzi is something a lot of youngsters dream of. What they aren’t aware, is that it requires tremendous efforts and hard work to make it till there. Kartik Sharma, a young emerging supermodel, through his hard work and exceptional modeling skills, had created a stride in the glamour world.

Having a passion to make it big in the fashion industry and being a top model was something Kartik always dreamt of and following his passion, he started working on himself from his early teens. The virtuoso has a long list of achievements in his career. Kartik is now the ‘Brand Ambassador’ of India’s leading event management company, ‘Big Projects’, which is owned by dynamic and astute entrepreneur Purujit Singh. It won’t be wrong to say that the young model has everything that is required to enter the domain. With sharp facial features, alluring looks, and charming personality coupled with exceptional modeling talent, Kartik is someone who has been successful in winning the hearts of thousands of his fans.

Kartik, in recent times, has collaborated with several well-known top photographers and production houses in the industry for a plethora of shoots. His big breakthrough came recently when he got a big opportunity to play a leading role in an upcoming music video featured by ‘Big Projects.’ Kartik is someone who is dedicated to his goal of making it big in the industry and he ensures everything for this. From rigorously sweating in the gym to taking a proper diet, the young model does everything to have a healthy and fit body which is a must for being a model.

Commenting on his journey, Kartik says, “The journey so far has been an incredible one and God has been kind to me. I take up everything as a challenge and works towards defeating those challenges. I know I have the talent and believe in the fact that if you have the dedication and passion, no one can stop you. Well, I would like to say just one thing- This is the beginning, a lot is about to come.”

Hailing from the capital city of Delhi, Kartik has indeed made a name for himself. He is now a name in the industry to reckon with. It was his hard work and skills that bought him some big offers. He signed with Big Projects and is currently the Brand Ambassador of the same. He was appreciated for his talent by none other than the famous stand-up Comedian, Raju Srivastava. Moreover, he was awarded by MTV fame Aahna Sharma. Kartik has also represented Big Projects in ‘Ayodhya Fashion Runaway Eve’ in Lucknow. With so many accolades and achievements in this short span, Kartik Sharma, without a doubt, has become an inspiration for a lot of upcoming models.