Bangladesh is concerned, and has taken up the NRC-CAA issue with the Indian officials behind closed doors. Dhaka scrapped three visits of ministers to India in recent months. India, for now, is holding its cards close to its chest, not revealing what it wants to do with those among the 19 lakh non-citizens who are Bengali Muslims. 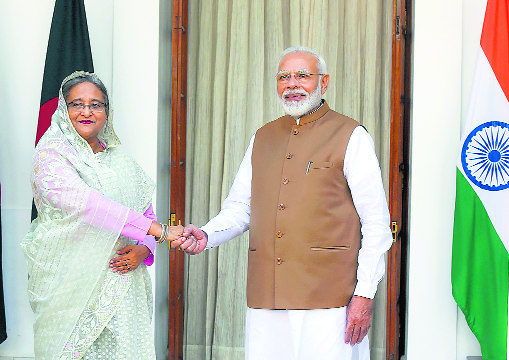 Assuage worries: India must not let the NRC and CAA affect its ties with Bangladesh.

India-bangladesh ties have had a dream run ever since Prime Minister Sheikh Hasina took over the reins in 2009. She began her stint by handing over the United Liberation Front of Assam (ULFA) leaders, who had made Bangladesh their base for years, back to the Indian government. This gesture underlined that for her, India’s security interests were important. Despite the hiccups over the Teesta agreement, which could not be signed during the then Prime Minister Manmohan Singh’s visit to Dhaka, the relations remained on track and, indeed, developed further.

Now, however, the situation has taken a new turn, mainly because of the Narendra Modi government’s decision to introduce the Citizenship Amendment Act (CAA) and the uncertainty around what happens to those who have been identified as illegal foreigners in Assam. The National Register of Citizens (NRC) has triggered a major concern in Bangladesh — of Bengali Muslims crossing the border to get back to safety rather than be imprisoned in Indian jails.

Already burdened with Rohingya refugees from Myanmar, Bangladesh is in no position to accommodate more refugees. Though the Indian government has consistently assured Dhaka that both the NRC and CAA are domestic issues and will not affect Bangladesh, Dhaka’s concern is natural because Bangladesh is at the heart of the foreign nationals’ issue which has spread from Assam to the other parts of India. For the BJP, it is part of the ideological agenda to free India of alleged Bengali Muslims from the neighbouring country.

Though the Awami League government has been circumspect in its comments, the ordinary citizens are angry. Naturally so, when illegal migrants are being termed as ‘termites’ by no less a person than Home Minister Amit Shah. The BJP flogs the issue of Bangladeshi migrants whenever it wants to play the Hindu card during the elections.

Any government would have reacted to this. Imagine a scene when Indians are called termites by political leaders of another country, be it in Europe, Asia or America. Granted that Shah was referring to illegal migrants, but whether legal or illegal, such a term used against any Indian, even if the person had entered a country illegally, would have led to a public backlash in India. The government, too, would have reacted angrily to such a description. And in today’s environment of hyper-nationalism, there would be demonstrations in front of the embassy of that country.

Sheikh Hasina’s government has been careful about not making any public comment, considering the excellent ties that the two countries enjoy. The most that the Prime Minister has said in an interview to a Gulf paper was that the CAA and NRC were ‘unnecessary’, though not forgetting to add that this was India’s internal matter.

Bangladesh is concerned, and has taken up the issue with Indian officials behind closed doors. Dhaka scrapped three visits of ministers to India in recent months. Foreign Minister AK Abdul Momen and Home Minister Asaduzzaman Khan scrapped their scheduled visits to India recently, though some weak excuse of scheduling problems was put out. Deputy Foreign Minister Shahriar Alam gave the Raisina Dialogue a miss too.

India, for now, is holding its cards close to its chest, not revealing what it wants to do with those among the 19 lakh non-citizens who are Bengali Muslims. According to the 1985 Assam Accord signed by the Central Government, the leaders of the All-Assam Students Union and the state government, the process was clearly spelt out. Alleged foreign nationals, read alleged Bangladeshi citizens, should first be identified, names deleted from the list of voters and deported. Dhaka will not accept a single person without the relevant papers to prove his nationality.

Bangladesh, despite being a Muslim majority country, is also extremely proud of its Bengali culture and heritage. Its links with the Bengali language, literature and music are strong. The Bangladeshi identity is defined not just by religion but by language and culture as well.

Liberals and the Awami League supporters are angry that India is talking of religious discrimination against the Hindus when the Awami League government has always emphasised its democratic and secular credentials. Amit Shah later clarified in the Rajya Sabha that he was not talking of the present situation in Bangladesh.

The BJP’s CAA move is both ideological and political. Ideologically, it believes that all Hindus have to be accommodated in India. Politically, the BJP’s eyes are firmly fixed on the Bengali Hindu electorate in Assam and West Bengal.

The CAA and NRC will also play into Bangladesh’s internal politics. The BNP, though the main opposition, is in a bad shape at the moment, with Begum Khaleda Zia in prison in connection with corruption cases and her son Tarique Rahman living in exile in London. The BNP had in the past dubbed Sheikh Hasina as an Indian stooge. Islamists and anti-Indian forces are lurking on the sidelines. The Jamaat-e-Islami and other militant Islamic groups will play the CAA and NRC cards against the ruling party. India has provided them with an excellent opportunity to work against the Awami League.

While the BJP plays out its political and ideological agenda, it would do well to keep in mind India’s security considerations. A Bangladesh which turns against India is not good news. China which is encircling India’s periphery can easily use the situation to its advantage and spread its footprints firmly in Bangladesh, as it has done in Myanmar and Nepal. So far, none of that has happened, but the danger is very much there.

Much will depend on how India plays its cards. If Delhi can manage the fallout of its domestic policies and insulate Bangladesh from the repercussions of the CAA and NRC, relations will remain intact. But it is a tough task.