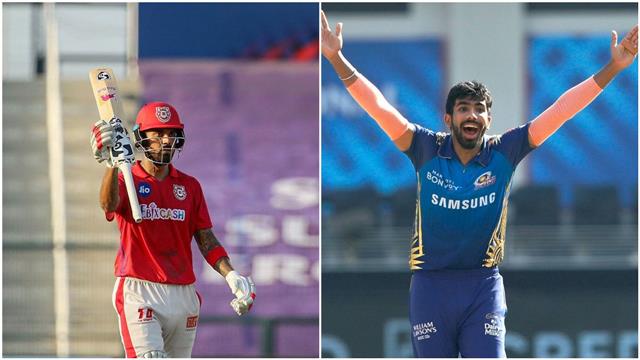 Despite his team out of the tournament in the league phase and not being able to make the playoffs, Kings XI Punjab captain KL Rahul continued to lead the run-getters’ list for Orange Cap in the Indian Premier League (IPL) this season.

Rahul, with 670 runs, is way ahead of SunRisers Hyderabad skipper David Warner, who has 546 runs, and Delhi Capitals’ opening batsman Shikhar Dhawan, who has 525 runs.

In the race for Purple Cap, Jasprit Bumrah of the Mumbai Indians (MI) leads the wicket-takers’ list with 27 scalps. He is two wickets ahead of DC pace bowler Kagiso Rabada who has 25 wickets. The two are followed by Bumrah’s MI teammate Trent Boult who has taken 22 wickets.

Among those who finished their IPL assignment on Friday are Royal Challengers Bangalore players Yuzvendra Chahal who moved to fourth in wicket-takers list with 21 wickets, Devdutt Padikkal (473 runs) and Virat Kohli (466 runs) who are placed sixth and seventh in the run-getters’ list.

SunRisers Hyderabad play Delhi Capitals in Qualifier 2 on Sunday, November 8, while the winner of Sunday’s game plays Mumbai Indians in the final on November 10 on Tuesday. IANS