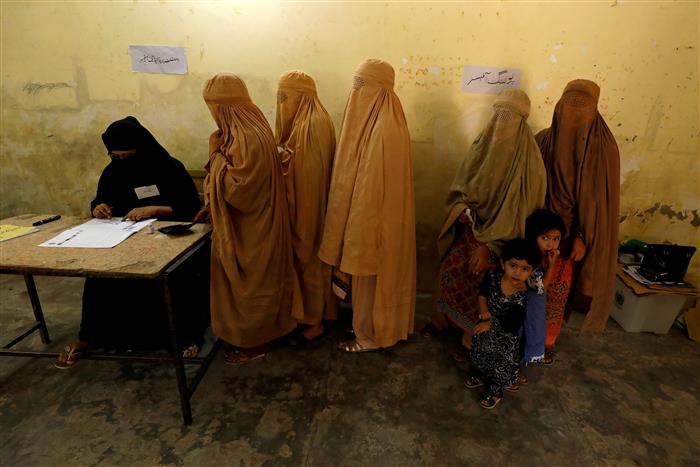 Voters in Pakistan-occupied Kashmir cast their ballots on Sunday to elect the region's legislative assembly, in an election marred by allegations of irregularities and violence that killed at least two workers of Prime Minister Imran Khan's party.

Counting will start after the voting ends.

India has previously slammed Pakistan for its decision to hold elections in Gilgit-Baltistan and said any action to alter the status of the militarily occupied region has no legal basis.

The assembly has a total of 53 members but only 45 are directly elected, while five seats are reserved for women and three are meant for the technocrats.

At a polling station in Charhoi area of Kotli district, at least two PTI workers were killed in clashes with PPP activists, Dawn reported.

In another incident, five police constables were injured after Jamaat-e-Islami activists attacked them with batons at the Dhal Chakhya polling station of Jhelum valley district.

Region's Chief Election Commissioner Justice (retd.) Abdul Rashid Sulehria condemned the killing in Kotli and said action will be taken against whoever is involved.

Voting in some polling stations of other constituencies was temporarily suspended due to incidents of violence. Several people were reportedly injured in clashes and a number of political activists were also detained by the police, the paper said.

Elaborate security measures have been taken and army troops deployed to maintain peace during the elections.

Meanwhile, the PPP has alleged that PTI workers were using force to influence the voting process.

She said complaints had been filed with the Election Commission on what she has termed as "irregularities" in various constituencies.

Traditionally, the ruling party in the country wins the elections in Pok.

Tehreek-e-Labbaik Pakistan (TLP), the radical Islamist party which was banned in April by the Pakistan government for its violent activities, is contesting on 40 seats. The TLP was not de-registered by the Election Commission of Pakistan even after the ban, enabling it to take part in the elections.

Thirty-three constituencies are located in PoK, while 12 seats are for refugees settled in different cities of Pakistan.

Apart from the ticket holders of different political parties, a total of 261 independent candidates are also in the race for the 33 constituencies in PoK, while 56 independents are vying for the 12 refugees' seats.

There are over 3.2 million eligible voters who can elect 45 members of the assembly for a five-year term. Officials said they expect up to 55% voter turnout.

According to a poll survey of Gallup Pakistan, 44 per cent of people support Prime Minister Imran Khan's party while its nearest rival PML-N has the support of 12 per cent voters. — PTI