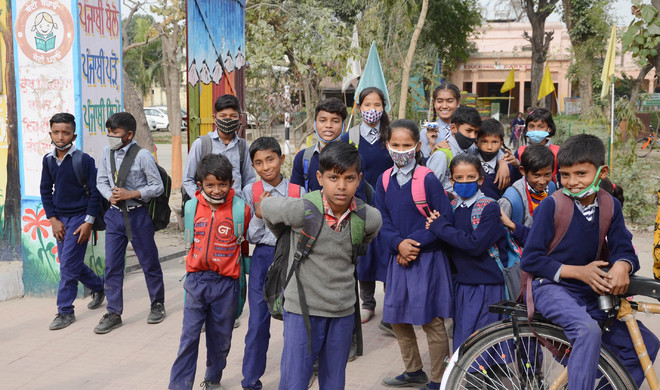 A recent spike in Covid cases has become a cause for concern for parents sending their children to schools, especially after seven staffers of four different schools tested positive on Wednesday.

With a total of 67 new cases, four tested positive at St Francis Convent School and one each at Government School Bhargo Camp, Sacred Heart Convent School, Gakhlan, and State Public School, Shahkot. Even on Tuesday, three new cases were teachers from Government School at Kalyanpur and two teachers from the Gakhlan School. The parents are wary as students are set to appear in offline examinations that are set to begin in many schools.

Dr Narotam Singh, owner of State Public School, said, “A woman helper tested positive after samples were taken from the school by the health team. She has been told not to attend campus for 14 days. All preventive measures to check further spread have been taken and she did not have any contact with anyone for the last two days. She perhaps contracted the infection from outside as no one else on the campus reported positive.”

Sarabjit Kaur, a parent of a Class III student of a private school, said, “Since both of us are working, we preferred sending our child to school for our convenience but the daily spike in the cases is worrisome. I shared my worries with other parents who are sending kids. We will see things for a few days and if condition worsens, we might resume online classes for our child again.”

Manbir Singh of CT Institutions, said, “We are on wait and watch mode and are taking all necessary precautions for the safety of students.”

Another micro-containment zone in Hoshiarpur

The district administration has declared Alawalpur village of Garhshankar sub-division a micro-containment zone after eight persons tested positive here in the last few days. Additional District Magistrate-cum-Additional Deputy Commissioner (ADC) Amit Kumar Panchal issued an order under Section 144 of the CrPC in the wake of the Covid-19 pandemic.

He said only medical emergency and essential services would be allowed in the micro-containment zone. He said teams of the Health Department would conduct a door-to-door survey and contact tracing at Alawalpur village.

In addition, all positive cases will be shifted to health centres as per protocol.

The Additional District Magistrate said the village had been declared micro-containment zone for 10 days.

He said a legal action under the Disaster Management Act- 2005 will be taken against violators. It is mentionable that two days ago, Dhamai village of Garhshankar sub-division was also declared a micro-containment zone.

As many as 50 new Covid-19 positive patients have been traced and two Covid deaths have been reported in the district today. Civil Surgeon Dr. Tanjir Singh Ghotra said today’s 50 new patients include 10 cases from the city and the remaining 40 are from various health blocks of the district. The two deaths include a 53 years old corona patient from Alampur village and a 76 years old woman of Rajni village.

CP Gurpreet Singh Bhullar on Wednesday again directed all officials to strictly enforce the Covid-19 protocols in the district. He directed them to launch a vigorous drive to check the violation of the mandates, including wearing masks and maintaining social distancing. He briefed all officials about the latest guidelines issued by the state government with respect to limitation on indoor and outdoor gatherings of 100 and 200 persons, respectively.