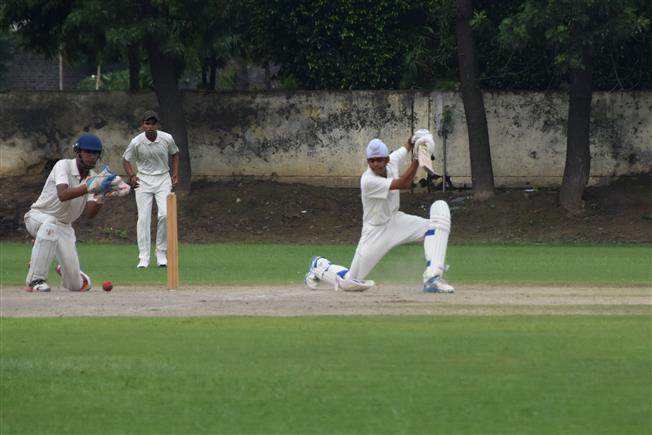 A batsman plays a shot during a match at GRD Global Education Institute in Ludhiana.

Hosts Ludhiana beat Amritsar by four wickets on the fourth and final day of the semi-final and secured their berth in the final in the ongoing Punjab State Inter-District U-16 Cricket Tournament being played at GRD Global Education Institute ground on Hambran Road here on Friday.

In reply to Amritsar’s first innings total of 219 runs, Ludhiana made 176 runs and conceded lead of 43 runs. However, Ludhiana did a commendable job by restricting the visitors, in the second innings to a small total of 74 runs thus needing 118 runs.

At draw of stumps on Thursday, Ludhiana in their second essay were 88 for three and required 30 runs to clinch the issue. Sukhsehaj Singh and Savinay Kakkar were at the crease with 27 and 18 runs against their names.

Today, Ludhiana resumed their innings and scored the required runs in just over an hour, losing two more wickets. Sukhsehaj lost his wicket at the total 102 with his individual contribution of 38 runs.

Next man in, Sargun Veer Singh made seven runs before losing his wicket while Kirat Dhawan followed him after contributing five runs with the scoreboard reading 117 for six. Savinay remained unbeaten on 24 runs off 146 balls and played a crucial role in his side’s victory as Ludhiana secured a place in the summit clash.