If only their screams could be heard : The Tribune India

If only their screams could be heard 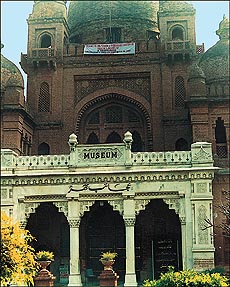 Many a record of painful hurt and suffering that Punjab, on either side, went through during the Partition is available in various formats — history books, literary renditions and films. But the unheard, silent screams of inseparable cultural heritage that too was cut into two has not been talked about much. Due to this divide, Lahore, once a hub of artistic and cultural activities, lost its sheen and soul.

The magnificent building of the Lahore Museum, designed by Bhai Ram Singh, well-known artist and architect, housed valuable heritage of the region, from Harappan times to the 20th century. Since the building could not be divided into two, its priceless collection was split.

There perhaps is no record available of the procedure that was devised to settle which part of the collection should be retained and which one ‘exported’ to India. It was as vague and unimaginative as the randomly drawn Radcliffe Line.

How would all those mute pieces of the art collection have reacted while being divided! Their silent screams, sighs and pangs of separation must have got lost in the din of loud cries and wails of the bloody human distress that engulfed the region. Their screams can be equated to the babbling of mad person that Manto had scribbled in his story Toba Tek Singh.

The Indian ‘share’ of the artefacts met the same shabby fate that many humans, ousted from their homes and hearths and carrying the hot-iron branding of ‘refugee’ status, were made to face. The collection was first dumped at the fort of the princely state of Patiala. It was then shifted to the Punjab School of Art at Simla. Later, when Chandigarh started taking shape, it was brought here, along with the School of Art (now College of Art) in 1962.

The collection remained dumped here, with a part of it, including rare miniatures and Gandhara sculptures, displayed in the school’s open and unsecured corridors till 1968, when the Chandigarh Museum was completed. As ignorant, rustic art students, we would often sit in the laps of black granite Buddha statues belonging to the Gandhara School. No loss of any work was reported.

However, only two years after the priceless collection was shifted to the ‘well-protected’ museum, a part of its valuable miniature painting collection fell prey to an unprecedented theft of 102 rare paintings.

I wish we were able to feel the sharp pain of separation and shifting of these silent screamers.