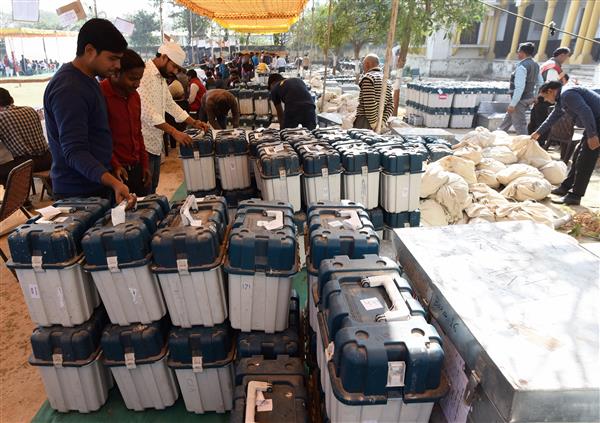 Election officials gather at a distribution center to receive electronic voting machines and other polling materials on the eve of the fifth phase of Uttar Pradesh Assembly elections in Prayagraj on Saturday. PTI photo

As Uttar Pradesh votes on Saturday to decide the fate of 692 candidates in 61 constituencies in Phase 5 and later in Phase 6 and Phase 7 in parts known as Purvanchal, unemployment is among the key poll issues, say observers.

Constituencies under Phase-5 include Allahabad, now Prayagraj, and its neighbouring townships where lakhs of students from backward districts of Purvanchal study in coaching centres to fulfil their aspirations of a government job, right from the top-ranking IAS to lower grades.

The bustling city is the only major centre in the region for education and medical facilities. It plays host to thousands of youngsters from Purvanchal who study in the B.Ed and BTC colleges and coaching institutes here to fulfill their dreams of a better future.

According to Anand Rai, a political observer in Gorakhpur, most of the students belong to lower middle class or middle-class families who cannot afford to send their children to expensive medical or engineering coaching centres and colleges, or big cities, and for whom getting a job is the main priority in life.

“They are frustrated and angry. You can see the effects of paper leaks, allegations of irregularities in recruitment, lathicharge on job seekers in social media, memes etc,” he says.

“In these elections, local issues have taken a backseat and issues like employment, inflation, stray cattle and 'Old Pension Scheme' taken precedence. Samajwadi Party’s promise to restore OPS if voted to power is drawing traction from UP government employees,” he adds.

Whether the ruling party or opposition, jobs/employment have been a part of the election campaign/manifesto of all political parties.

Countering the Opposition criticism, Adityanath has been claiming to have provided more jobs than the two earlier governments.

Ruling party leaders have also been pitching on increasing prospects of self-employment and alternate employment/religious tourism in upcoming religious centres like Ayodhya and Varanasi.

However, throughout his campaign, Samajwadi Party chief Akhilesh Yadav has been urging people to defeat the BJP "which increased inflation, corruption, snatched jobs of youth and destroyed farmers".

Congress leader Priyanka Gandhi Vadra too has been hitting out at Adityanath on the issue while accusing the Narendra Modi government at the Centre of "destroying trade and businesses with ill-conceived policies".

The districts going to the polls on Sunday include Sultanpur, Chitrakoot, Pratapgarh, Kaushambi, Prayagraj, Barabaki, Bahraich, Shravasti and Gonda, Amethi, once considered a Congress bastion, and Ayodhya, the epicentre of movement for the construction of Lord Ram temple.

2022 will be the first time that Ayodhya will vote without the backdrop of the Ram Mandir controversy, which played a major role in saffron politics in the past three decades.

A prominent OBC face, Keshav Prasad Maurya is playing an important role in the BJP campaign.