US to ease vaccine raw material exports to India 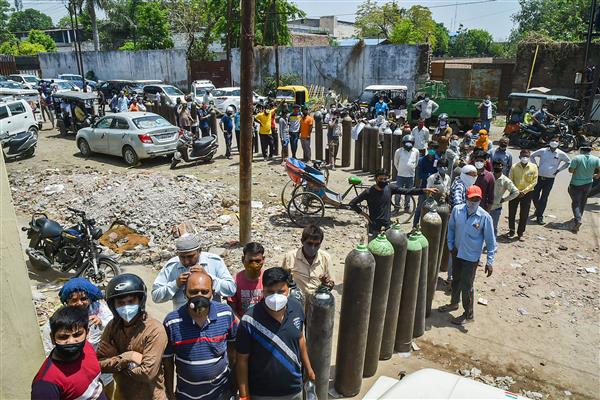 India is grappling with a record-setting surge in coronavirus infections, with hospitals running out of critical oxygen supplies. Representational photo: PTI file

The US has said it has identified sources of specific raw material urgently required for Indian manufacture of the Covishield vaccine that will immediately be made available for India.

The assurance came after a conversation between National Security Advisers Jake Sullivan and Ajit Doval later in the day.

Sullivan and US Secretary of State Tony Blinken had earlier in the day sought to deflect intense criticism of the US ban on export of raw materials for vaccines that has hit production in India, forcing it to renege on export commitments.

A White House statement said the US has identified supplies of therapeutics, rapid diagnostic test kits, ventilators, and PPE that will be immediately dispatched to India. The US is also pursuing options to provide oxygen generation and related supplies on an urgent basis.

In the long term, the US is part-funding expansion of manufacturing capability for BioE, the vaccine manufacturer in India. This will enable it to ramp up to produce at least 10 crore doses of vaccines by the end of 2022.

Public anger in India had mounted after the US banned the export of raw materials used for vaccine manufacturing, affecting exports.

German Chancellor Angela Merkel refused to acknowledge New Delhi’s compulsions and hinted that the EU might have to reorient its supply chains away from India if it defaulted on its export commitments.

Bangladesh, having waited for a second batch of Indian vaccines, is now tying up for the manufacturing of Sputnik vaccines to meet future requirements. The international vaccine alliance GAVI has publicly accused India of missing out on vaccine export commitments to less developed countries.

The US is also asking a Center for Disease Control (CDC) team to work with the US embassy, India’s health ministries and “Epidemic Intelligence Service’’ staff. USAID will try to fast-track the mobilisation of emergency resources available to India through the Global Fund.