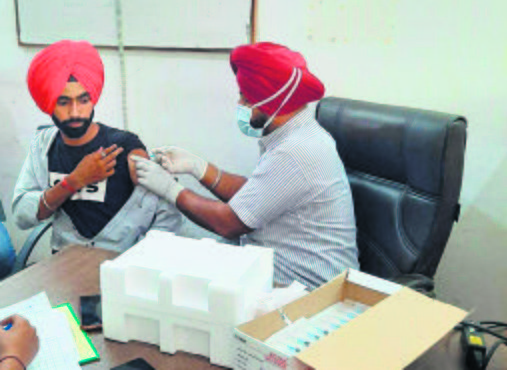 A healthcare worker administers a dose of the Covid vaccine to a resident in Patiala. Tribune photo

Despite the state government’s effort, only 7.3 per cent of the target population in the district could be fully be vaccinated so far.

Of 12 lakh target population, only 87,506 people, including healthcare workers, have received both doses of Covid vaccine till now. As per the Health Department, 4.56 lakh people have already received first dose of the Covid vaccine. Interestingly, maximum beneficiaries aged between 45 to 60 years, who are among the high-risk group, have received the first jab.

Data reveals that 1.61 lakh beneficiaries, aged between 45 and 60 years, and 84, 6333, above 60 years, have received the first vaccine shot. Youngsters have also shown an overwhelming response to the Covid vaccine. As many as 1.44 lakh beneficiaries aged above 18 years have received the first dose. The vaccination of this age group started last month only.

Dr Veenu Goyal, District Immunisation Officer, said so far, they had administered 5.4 lakh doses in the district. “Above 45 per cent of the target population has already received one dose of the vaccine. We are aiming to administer first dose to maximum population at the earliest so as to avoid the third wave of the pandemic.”

When asked about the second dose, she said, “Owing to wide gap period in booster dose of the Covishield vaccine not many people could receive both doses. However, their numbers are expected to rise in the coming days because thousands of beneficiaries will be completing the gap.”

Despite intermittent supply of vaccine, the Health Department never stopped vaccination drive in the district, she added.

Meanwhile, the Patiala Civil Surgeon, Dr Prince Sodhi, said, “We will hold another mega vaccination drive soon to cover maximum population. People should realise the importance of vaccine. They must get vaccinated at the earliest.”