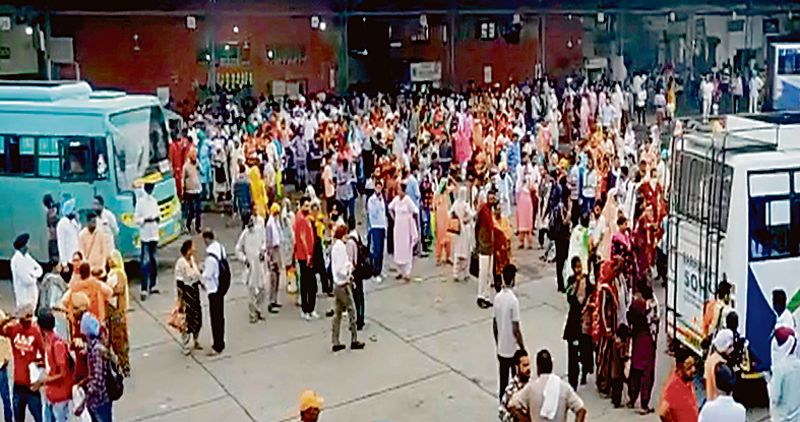 Chaotic scenes were witnessed at the Patiala Bus Stand on Saturday, as the indefinite strike by contractual employees of Pespu Road Transport Corporation (PRTC) entered the sixth day.

Passengers were left stranded at the bus stand as only 32 per cent of PRTC buses were on roads, owing to the strike. As a result, passengers were seen overloading private buses and even sitting on their roofs.

A passenger, who had to board a bus for Sunam, said, “Even after so many days of the strike, the government has not been able to make any alternative arrangements. The passengers are a harried lot.”

Meanwhile, the protesting employees alleged that private operators, taking advantage of the ongoing strike, were running school buses as regular buses from inside the bus stand.

Harkesh Ricky, a union leader, said the PRTC management was threatening to throw them out of jobs if they did not join back their duties. Apart from regularisation, their demands included increasing the number of buses. “We are not only fighting for ourselves, but also for the people of Punjab, to provide them better services,” Ricky said.

Bhupinder Pal Singh, managing director, PRTC, said the corporation was facing financial losses due to the ongoing strike as only 32 per cent buses were running. He said, “The government will hold a meeting with the protesting employees on September 14. I am hopeful that the situation will normalise soon.”