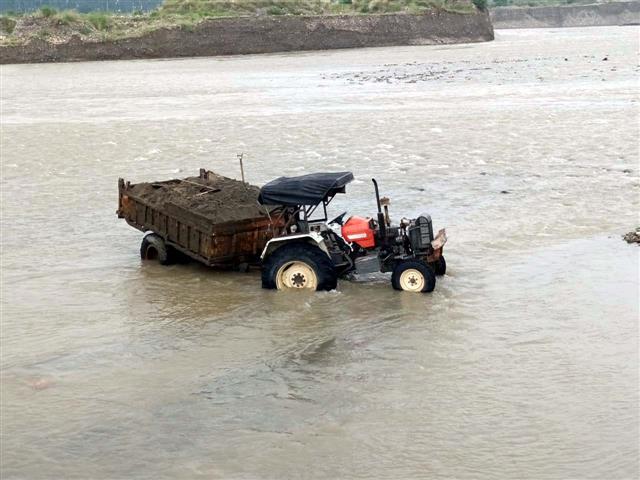 Trucks and mining equipment have been seized during the drive.

The month-long concerted drive launched by the Pathankot police has yielded impressive results with the cops registering 14 FIRs against 41 offenders. The police have arrested 19 accused, while a hunt is on for others.

Several trucks and mining equipment have also been seized during the drive. The drive started on July 27 following complaints that several groups of people enjoying political patronage were excavating sand and gravel from the Ravi river and two of its tributaries — Chakki and Ujh — at different sites.

The cops had come under sustained pressure from residents when the Chakki railway bridge collapsed on August 21. The drive was already underway then, but following the rail tragedy the police intensified its efforts and came down heavily on unauthorised excavation.

Senior Superintendent of Police (SSP) Harkamal Preet Singh Khakh said he had formed several teams, a majority of which were tasked with checking mining during night. Excavation, both daytime and night time, has been banned by the government from July 1 to September 30 due to the monsoon season.

After nearly a week of observing the modus operandi adopted by the miners, the first success came the cops’ way on August 8 when FIR No. 60 was clamped on a group of persons taking out sand from Chakki under the Taragarh police station.

The cops managed to arrest one person, while four others fled under the cover of darkness. A case under Section 379 (theft) and relevant sections of the Mining Act was registered against the accused. An overloaded truck carrying sand and gravel was also impounded.

The second FIR came a day later when the police raided a site on Ujh and arrested five persons. This time, five loaded trucks were seized.

The next few days saw a series of cases being registered at different police stations of Pathankot district. Following this drive, mining activities have come down substantially in this area.

The SSP disclosed that on many earlier occasions the cops had the miners on the run, but in a majority of cases the accused would secure anticipatory bail and consequently would roam freely.

The last case was registered yesterday at the Narot Jaimal Singh police station. One person was arrested in this case, while a truck of mining material and a poclain machine were confiscated.

“First of all we identified the sites where this type of excavation was going on. Then we formed teams which raided these places. Fourteen FIRs in one month are the result of the hard work put in by my officers. The drive will continue unabated,” said the SSP.