Women add the X-factor to farmers’ protest : The Tribune India 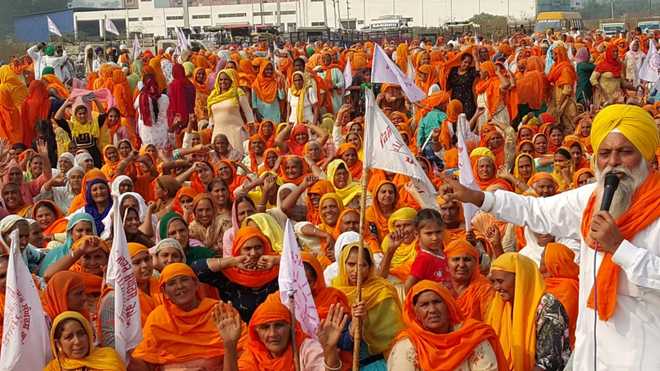 The farmers’ stir has overwritten the past figure — and history— of any gathering of the women in the country for a cause. file

There was a time when women dared not attend mass gatherings beyond their own villages in such a big number. However, every political party and many mass organisations had formed their women wings but the present position to attend the women en-masse from villages to the country’s capital for months together was seen for the first time in history of the trade union.

The farmers’ stir has overwritten the past figure — and history — of any assemblage of women in the country for a cause.

Satnam Singh Pannu, state president of Kisan Mazdoor Sangharsh Committee, Punjab, has attributed the contribution of women to shape what the agitation has ballooned into today, gaining support from people globally. “The participation of women workers from village level to the Delhi morcha remained remarkable than the male number till date,” he said, adding that more mature suggestions were given by the women leaders to maintain peace and remain firm on their stand which the national leadership of the kisan morcha has followed duly.

At the initial stage of the present agitation about four months back, as many as 51 women workers presented themselves for court arrest in Tarn Taran and the number varied in other districts. Around 6,000 of women farmers have participated. There was hardly any village in the district left without their cooperation. The women jatha under the leadership of Rupinder Kaur Marimegha and Seema Sohal of ASHA workers, state leader, attended the morcha for days together. Many more women jathas under the banner of each farmer organisation, political party and other mass organisations have also taken.

There were days when only women workers participated in the demonstrations and speakers, too, were the women. They organised demonstrations in the area with remarkable attendances. The women wing of organisations like the ASHA workers, anganwadi workers, mid-day meal workers and the other employees outfits, too, extended their support staging dharnas from time to time.

Gurpreet Singh Gandiwind a, trade unionist, said the role of women in the present farmers agitation had created history. “Women usually used to take part in the dharnas just for a few hours owing to household work and obligations,” he said. Baljinder Kaur, another trade unionist, added that the present farmer agitation had made women more aware politically. “It has developed our political knowledge,” said Baljinder.