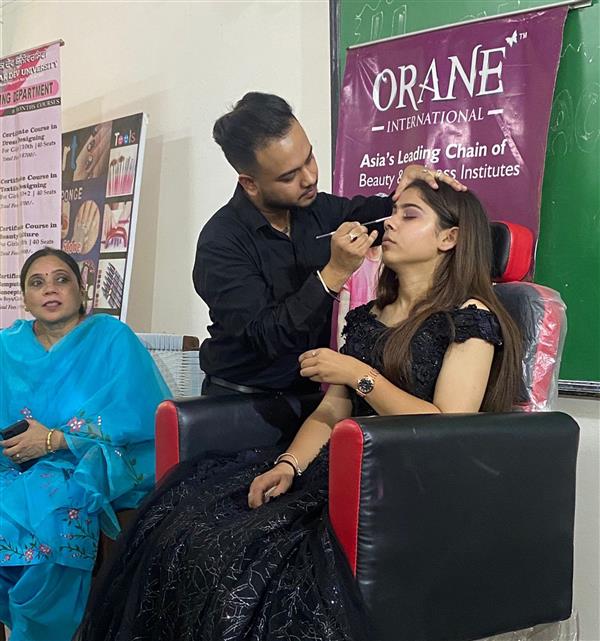 A workshop on party makeup and hairstyle was held at Guru Nanak Dev University in Amritsar on Friday. Tribune photo

Amritsar: The department of lifelong learning of Guru Nanak Dev University organised a workshop on “Party makeup and hairstyle” in collaboration with Orane Academy, Mall Road, Amritsar. Prof (Dr) Saroj Bala, director of the department, welcomed the makeup artists and apprised the students about different job opportunities in the field of cosmetology and advised the students to develop the perfection in the skills by doing maximum practice. The professionals from academy demonstrated different steps of makeup and also gave detailed information to the students about the different brands of products used. They made aware about the products to be used according to the different seasons. They also imparted hands-on training to the students about the use of different gadgets for better outcome. They also provided tips of eye makeup in which they explained the methodology of using several brushes.

The Amritsar Group of Colleges organised a two-day seminar in association with the Medicaid Hospital and Critical Care Centre, Amritsar, on the occasion of National Nutrition Week. Dr PS Grover and Dr Gaurav Singh from Medicaid Hospital & Critical Care Centre addressed the audience. Dr Grover emphasised the fact that the nutritional requirement of the body could be fulfilled from the nature, and that reliance on artificial supplements should be avoided. He added that obesity and many others health issues were lifestyle diseases, which could be prevented by changing one's lifestyle and dietary habits. The seminar was attended by Amritsar Group of Colleges Principal Dr VK Banga, students, among others. The event concluded with a one-on-one consultation and guidance session on nutritional requirements by Dr Gaurav.

To develop an interest among students in space science and to provide an opportunity to amateur astronomy enthusiasts to look into the cosmos, the Postgraduate Department of Physics of DAV College, Amritsar, organised a night sky gazing event, “Starry Night” on the college campus. Principal Dr Rajesh Kumar said the highlight was the observation of planets Jupiter, Mars and Saturn. The best part was that storm bands on Jupiter were seen. Students engaged in telescopic viewing of moon, Jupiter and its moons, Saturn and its ring and Mars. Apart from telescopic observations, the programme also consisted of unaided “eye star gazing”, introduction to “rashis” and “nakshatras”, satellite passes, star clusters, galaxies and nebulae. “We used a telescope with which students and other enthusiasts were able to catch a glimpse of three of Jupiter’s moons — Europa, Ganymede and Callisto — Saturn’s stunning rings and of the moon in such detail that its remarkable craters would not leave participants’ thoughts for a long time,” said Dr Sameer Kalia, head of the physics department. Students also observed constellations by drawing them across the night sky with laser pointers. Those participating also got to see the striking Andromeda galaxy through a telescope.

Bharatiya Vidya Bhavan’s students and yoga teacher participated in the 46th state-level “Yogasan” competition under the guidance of Director Principal Dr Anita Bhalla at DMC School, Ludhiana. As many as 350 players participated in this competition. Karthik in the age group of 10 to 12 and Kaustubh in the age group of 16 to 18 won the bronze medal. In the age group of 21 to 30, yoga teacher Sanjay Kumar from Bharatiya Vidya Bhavan SL Public School received the gold medal. Karthik, Kaustubh and Sanjay Kumar have been selected in the Junior National Yogasan competition to be held in November. Director Avinash Mahendru and the Director Principal congratulated the parents and teachers of the students.

Dr Vipin Jistu, Principal of Police DAV Public School, was honoured with the Best Principal Award by Sahodaya School Complex Group of CBSE Schools, Amritsar, on Teacher’s Day. Cabinet Minister Dr Inderjit Singh Nijjar attended the function as the chief guest. Dr Jistu has been fulfilling his responsibility in Police DAV Public School, Amritsar, with devotion and dedication for the past five years. Expressing gratitude to all dignitaries and Principals of various schools, he said this award is a new responsibility along with respect.