PHILLAUR: Terming Narendra Modi-led NDA Government as anti-Dalit, anti-poor and anti-farmer, the Congress candidate from Jalandhar Lok Sabha seat, Santokh Singh Chaudhary, while addressing a gathering at Nurmahal in Nakodar assembly segment today said if voted to power, the BJP would abolish the reservation system in the country by implementing the hidden agenda of the RSS, which had already been exposed during the Bihar assembly polls and the people of Bihar would gave the BJP a befitting reply for the same in the ensuing elections. 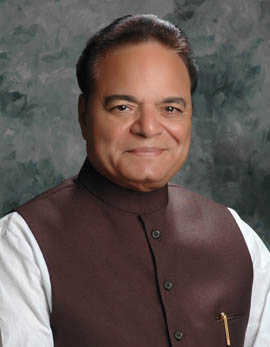 Terming Narendra Modi-led NDA Government as anti-Dalit, anti-poor and anti-farmer, the Congress candidate from Jalandhar Lok Sabha seat, Santokh Singh Chaudhary, while addressing a gathering at Nurmahal in Nakodar assembly segment today said if voted to power, the BJP would abolish the reservation system in the country by implementing the hidden agenda of the RSS, which had already been exposed during the Bihar assembly polls and the people of Bihar would gave the BJP a befitting reply for the same in the ensuing elections.

Accompanied by senior Congress leader Jagbir Brar, Chaudhary said: “You all know that the BSP and the SAD are always hand in glove to make a cut in the Congress’ vote bank, the same practice will be repeated this time too.”

Chaudhary rolled out the promises made by the Congress in the poll manifesto and explained about the dream scheme of Minimum Income Guarantee, in which Rs 72,000 per annum income was guaranteed to every poor.

He revealed that the Congress had promised a holistic agenda of affirmative action for SCs, STs, and OBCs who constitute more than 75 per cent of the population.

“The Congress has assured to set up an Equal Opportunities Commission, which will recommend affirmative action strategies and policies to achieve equality and equity in education, employment and in economic opportunities,” he added. He said if voted to power the Congress would fill all backlog vacancies reserved for SCs, STs, and OBCs in government, semi-government and central public sector organisations within 12 months.

He said the Congress promised to amend the Constitution to provide reservation in promotion for SCs, STs, and OBCs. Pointing out on the “criminal and callous” attitude of the SAD on the gruesome incident of sacrileges and police firing in which four youth were killed in Nakodar in 1986, Chaudhary said even the SAD candidate Charanjit Singh Atwal also passed the buck to his party as far as allegation of “hushing up” the report of Special Investigation Team (SIT).

Chaudhary said the SAD would be vanished from the state and it not win a single seat. “The real anti-panth face of Badals has already been exposed before the Sikhs, especially after their shoddy role in the sacrilege incidents and firing incidents on the peaceful Sikh protesters in which two innocent youth were killed, during their regime” Chaudhary added.

Meanwhile, reacting on the allegations made by SAD president Sukhbir Singh Badal on late Master Gurbanta Singh for waving black flags to Dr BR Ambedkar when he visited Jalandhar in 1952, Chaudhary Santokh Singh yesterday refuted such allegations and ruled out any such incident occurred ever.

“These are false and hollow allegations as my father was on good terms with Dr Ambedkar and there was no question of any protest during his visit to Jalandhar during those days,” said Chaudhary who was addressing a massive gathering in Phillaur yesterday.

“Our family always stood with the ideology of Ambedkar and even in Parliament also I quoted Dr Ambedkar many a times to spread his vision towards uplift of Dalits,” he said.