Commodore Babru Bhan Yadav was the first recipient of Maha Vir Chakra in the Indian Navy, the second-highest military decoration in the face of the enemy. 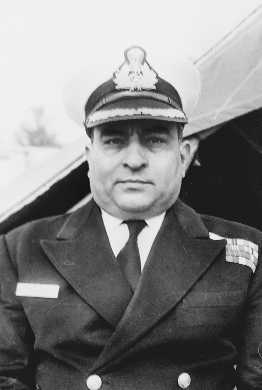 Commodore Babru Bhan Yadav was the first recipient of Maha Vir Chakra in the Indian Navy, the second-highest military decoration in the face of the enemy.

Babru Bhan, affectionately known to all simply as Babru, was born into a military family at Bharawas village in Gurgaon district of then undivided Punjab. Bharawas is now in Rewari district.

Babru grew up listening to the stories of valour of 'Veer' Ahirs from his father Major Bhagwan Singh, a decorated soldier who served with distinction in the British Indian Army and was awarded the Order of British Empire (OBE) during World War I. Young Babru knew he was destined to be a soldier. He did his matriculation from BS Ahir High School, Rewari. He graduated in the science stream from the prestigious St Stephen’s College, Delhi, and was selected as a Direct Entry Graduate. He served onboard HMS Devonshire as Midshipman for two years and was commissioned into the Indian Navy, the multi-dimensional combat force for blue waters tasks, on January 1, 1951. Water deficient Ahirwal produces a shipman, and daredevil at that, what a feat!

Babru was quick at uptake and ever exuberant and was soon learning the nuances of the sea warfare. His brilliant aptitude at all matters of marine did not go unnoticed by his superiors. With just four years into service, Babru was nominated to attend the Anti-Submarine Warfare course in the United Kingdom in 1955; a specialised course done mostly on front line ships. As Commander (equivalent to Lieutenant Colonel in the Army), Babru Bhan had a one-year challenging tenure on missile boats in the USSR.  Commander Babru Bhan became an anti-submarine warfare specialist and with one year on missile boats, he was considered most suitable to command a frigate. With war clouds hovering, Commander Babru Bhan, on December 2, 1971, was given the command of 25th ‘K’ (Killer) Squadron composed of three missile boat task force, namely INS Veer, INS Nipat and INS Nirghat. And who knew just two days later, during the 1971 war with Pakistan (Operation Cactus Lily), the Karachi harbour would be witness to the onslaught and fury of this Killer Squadron led by daredevil Babru Bhan.

Commander Babru Bhan was awarded the Maha Vir Chakra for his conspicuous act of bravery in the face of the enemy against all possible odds during the 1971 war on the western water front. The summary of the gallant action by Commander Babru Bhan and his Killer Squadron is available with the Naval Archives.

The Killer Squadron led by Babru Bhan annihilated the Karachi Harbour with a fleet of just three missile boat task forces; the Japanese had employed a far bigger Armada to annihilate the US naval fleet at Pearl Harbour 26 years ago.

Babru Bhan, known as Babru to all, was promoted to the rank of Captain and in turn to Commodore (equivalent to Brigadier in the Army) a year later. Before hanging his Navy Whites, Commodore Babru Bhan had an eventful two-year tenure as Deputy Director General, National Cadet Corps (NCC), in Chandigarh looking after the NCC in Punjab, Himachal, Haryana and the Union Territory of Chandigarh.

Commodore Babru Bhan never married. Even after retirement, he remained wedded to his first and only love — the Indian Navy. He breathed his last on January 22, 2010.

The summary of gallant action in Naval Archives reads...

.On the night of December 4, 1971, Commander Babru Bhan as Squadron Commander of a three missile boat task force was ordered to carry out an offensive sweep on the enemy coast of Karachi. The Karachi harbour, being strategically important, was heavily guarded by the enemy. With a narrow mouth covered by formidable coastal defence, the harbour seemed impregnable. Notwithstanding the threat of surface and submarine attack by the enemy, Commander Babru Bhan, onboard INS Nipat, led his squadron deep into enemy waters and encountered two groups of large enemy warships. Despite heavy fire from the enemy destroyers and at great risk to his personal safety and of his personnel, Commander Babru Bhan fearlessly led his squadron towards the enemy in a swift and determined attack. In that daring Indian marine assault, two enemy destroyers (ships) and one minesweeper were sunk. After completion of the mission assigned to his task force, and before sailing back to Bombay, Commander Babru Bhan bombarded the Karachi harbour and fearlessly sailed back, leaving the harbour in flames.