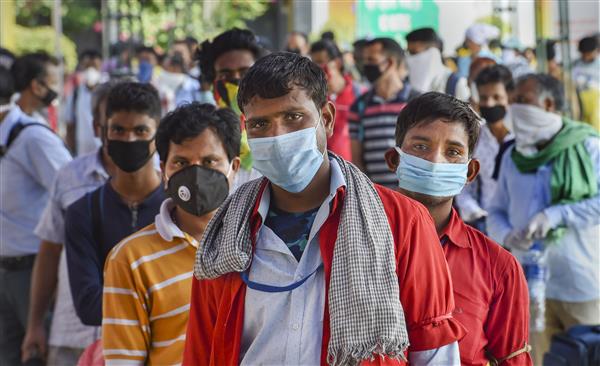 As COVID-19 cases in the national capital have spiralled in the last 10 days, the recovery rate has dipped to 39.58 per cent as reported on June 4, according to official figures.

According to the Union Ministry of Health and Family Welfare data, Delhi also has the highest number of active cases — 14,456 cases — in the country after Maharashtra (41,402).

This is the first time in the past two weeks that the recovery rate has fallen below 40 per cent.

As many as 9,898 patients have recovered, been discharged or migrated so far, while there are 14,456 active cases, the Delhi health department said in its bulletin a day earlier.

This pegs the recovery rate as reported on June 4 at 39.58 per cent.

Prior to that the rate varied from 48.18 per cent on May 25 to 40.35 per cent on June 3, according to the figures shared by the Delhi health department in its bulletins.

The May 26 bulletin said there were 6,954 patients who had recovered, been discharged or migrated, while there were 7,223 active cases. The death toll on that day stood at 288.

A total of 44 fatalities were reported on June 3, which took place between May 3 and June 3, the Thursday bulletin said.

Seventeen deaths took place on June 2, it said. Nearly 1,300 fresh cases were reported on that day.

In a joint virtual press conference with Delhi Health Minister Satyendar Jain, Deputy Chief Minister Manish Sisodia, on Thursday, urged people who were infected with COVID-19 but asymptomatic, to remain at home and isolate themselves.

The government has been maintaining that the recovery rate of patients who are home quarantined has been in the range of 80 to 90 per cent.

Among the fresh cases, a 44-year-old staff member posted at the control room of the Delhi Fire Service was tested positive after which the office was sanitised, officials said.

Meanwhile, with relaxations in COVID-19 lockdown norms, the Jamia Millia Islamia has reopened its offices with 50 per cent staff reporting on a rotation basis, but employees above 60 years are working from home.

The university issued a formal order on reopening on Thursday even though its offices were back in operation from June 1, when the Unlock-1 kicked in.

Meanwhile, to effectively deal with the spread of COVID-19, the West Delhi administration has set up a dedicated call centre and constituted several teams as part of its new strategy to contain the dreaded virus.

According to the plan, the staff deployed at the control room will make at least one call to each COVID-19 patient for counselling and to know about his or her well-being for the initial five days from the date the patient is found positive.

He said action should be taken within six hours through field-level teams such as medical teams, “Corona Foot Warriors” and officials deployed in containment zones.

On the occasion of World Environment Day, Environment Minister Gopal Rai said the Delhi government would run a special campaign to promote the use of medicinal and herbal plants in the next one year in view of the COVID-19 threat.

The medicinal and herbal plants would be given free at the Forest Department’s nurseries in the city. These included curry leaves, gooseberry, ‘neem’, ‘bahera’, ‘jamun’, guava, ‘arjun’, ‘sahjan’, wood apple and lemon, the minister said on the occasion of World Environment Day.

“These plants help boost immunity which is crucial in view of the COVID-19 outbreak. Anyone can get them for free from the Forest Department’s nurseries. Pamphlets listing the benefits of the plants will also be given to the people,” the Minister said.  PTI