After surplus rains in early stages, monsoon over Punjab, Haryana, Himachal slips into the red 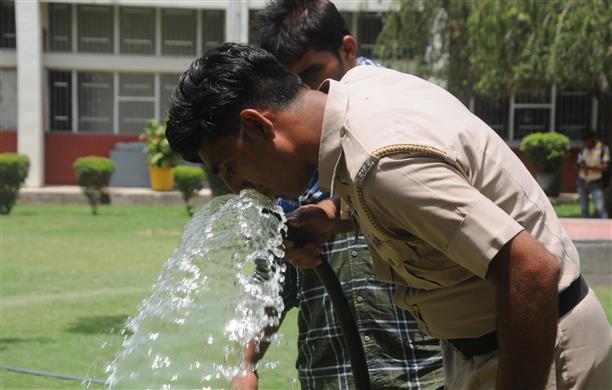 A policeman drinks some water in the scorching heat in Karnal on June 2, 2021. Tribune file photo

After having experienced surplus rains in the early stages of the season this year, the sought western monsoon over the region has slipped into the negative zone. Cumulative rain is less by 17 per cent in Himachal Pradesh, 12 per cent in Punjab, and 8 per cent in Haryana.

According to data compiled by the India Meteorological Department (IMD), the hill state of Himachal received 96.1 mm rain from June 1 to July 3 against the normal of 115.5 mm for this period.

The agrarian states of Punjab and Haryana received  54.3 mm and 52.2 mm rain, respectively for the aforementioned period as compared to the normal of 62 mm and 56.5 mm for these two states.

The monsoon, which had arrived over northwest India about 15 days ahead of its normal date of onset, was surplus by 14 per cent in the region during the month of June. IMD data shows that the region had received 85.7 mm rain against the normal of 75.3 mm last month.

Though monsoon had made good progress in its early phase, it later weakened. It has covered most of the country except parts of Punjab, Haryana and Delhi, and IMD expects it will continue to elude the region for a few days more, although some areas in north India experienced light rains and storms over the past 24 hours.

This has been attributed to the impact mid-latitude westerly winds and the absence of formation of low-pressure system over North Bay of Bengal as well as an unfavourable Madden Julian Oscillation (MJO), which is a major fluctuation in tropical weather due to an eastward-moving pulse of cloud and rainfall near the equator that typically recurs every 30 to 60 days.

The IMD has said that spatial distribution suggests that below normal to normal rainfall is likely over many areas of northwest India during the month of July. Dry westerly and southwesterly winds from Pakistan to northwest India at lower levels can also bring in short spells of heatwave conditions over some parts of Haryana.