19 tunnels to be constructed in Himachal, work on 8 in progress: Gadkari 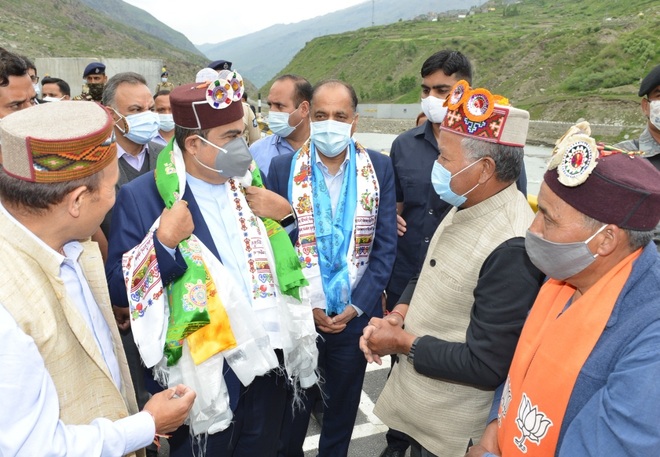 Union minister Nitin Gadkari being accorded a traditional welcome by locals in Lahaul on Thursday.

Union Minister for Road Transport and Highways Nitin Gadkari, during a visit to Atal Tunnel today, said 19 tunnels would be constructed in Himachal.

He said the work was in progress on eight tunnels while the work on 11 tunnels would be awarded soon. Gadkari was accompanied by Chief Minister Jai Ram Thakur. They were accorded a traditional welcome by people of Lahaul and Spiti district while they entered the north portal of the tunnel.

Gadkari said the BRO would also construct tunnels at Shinkula, Baralacha, Tanglangla and Lachungla for better connectivity to border areas.

Later, the Union minister inaugurated and laid the foundation stone of nine road projects of 222 km worth Rs 6,155 crore through video-conferencing from Manali. He dedicated the four-laned Parwanoo-Solan section of the NH-22 (now NH-5) to public. He also inaugurated a double-lane bridge built by the NHAI at a cost of Rs 12.86 crore on the Beas in Manali. The 80-metre long and 28-metre wide bridge would ease traffic jams in Manali.

He said that better roads would go a long way in promoting tourism. In two years, the travelling distance between Delhi and Kullu would reduce to seven hours.

Gadkari said the road projects worth Rs 15,000 crore would be awarded this year. The DPR for the construction of a 40-km left bank double lane road project from Kullu to Manali would be prepared at the earliest.

Minister of State for Finance Anurag Thakur, addressing the event virtually from New Delhi, said the road infrastructure had witnessed an unprecedented expansion during Gadkari’s tenure.