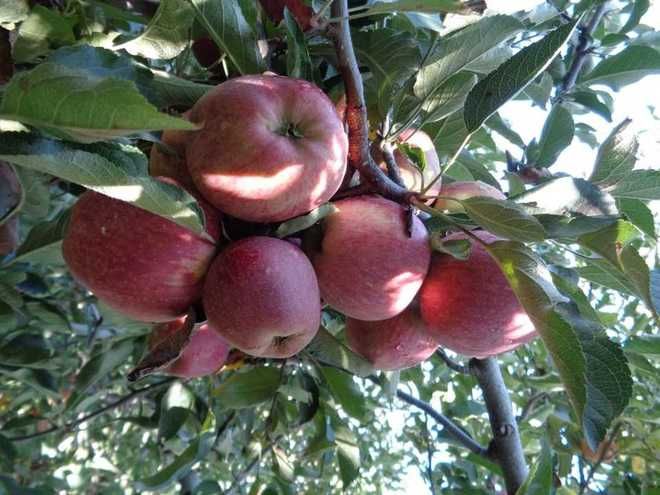 Even as the apple production is likely to be higher this time than the past couple of seasons, apple growers in Himachal are not upbeat. The reason: Quality deterioration due to untimely snowfall, hailstorms and a dry spell, besides a sluggish market.

“As per our record, 2.1 crore apple boxes have hit the market,” said Gyan Singh Verma, Deputy Director, Horticulture Department. “Our production forecast this season is 3.22 crore boxes. With around one crore more boxes expected from Shimla and Kinnaur districts, we will end up close to our production forecast,” Verma said. Taking into account the sales made to the HPMC, HIMFED under the Market Intervention Scheme (MIS) and to CA stores, the total production in the state is expected to reach around 3.75 crore boxes.

“Around 42,000 tonne apple has been procured by the HPMC and Himfed under the MIS,” Verma added.

Even as the Horticulture Department expects the crop to go beyond 3.5 crore boxes, growers feel it’s not a bumper crop. “Considering the fact that the state produced over 5 crore boxes of apple in 2010, the production of 3-4 crore boxes can only be termed as average,” said Harish Chauhan, president of the Fruit, Vegetable and Flowers Growers Association.

“The growers will suffer a collective loss of over Rs 1,000 crore this time. Around Rs 300-crore loss was estimated by the Horticulture Department due to untimely snow and storms at the flowering stage. Earnings have taken a further hit as the quality and size of the fruit was also affected due to hailstorms and a dry spell,” Chauhan said.