The maximum temperatures stayed four to five degree below normal and Una was the warmest at 26.8 degree C while Keylong was the coldest during the day with 11.1 degree C 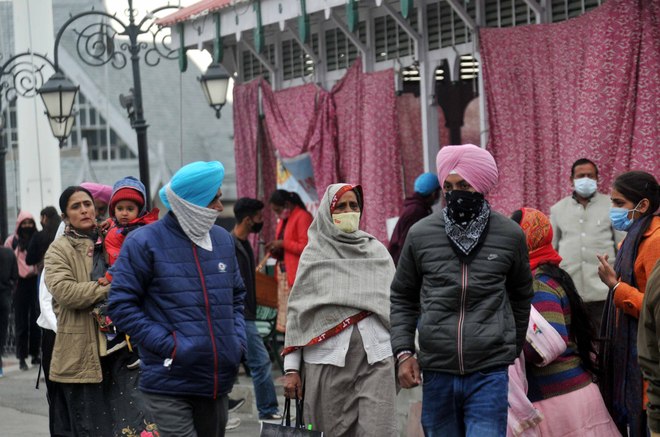 Tourists roam on The Mall in Shimla on Wednesday. Photo: Amit Kanwar.

Amid warning of heavy rain tomorrow and thunderstorm, lightning and snowfall on December 5, most parts reeled under severe cold wave conditions as sky remained heavily overcast and icy winds swept the region today.

The maximum temperatures stayed four to five degree below normal and Una was the warmest at 26.8 degree C while Keylong was the coldest during the day with 11.1 degree C.

The minimum temperatures stayed close to normal and Keylong and Kalpa recorded a low of minus 4 degree and minus 0.5 degree, followed by Manali 1.2 degree, Sundernagar 2.3 degree, Solan 3 degree and Kufri 5 degree C.

The Met office has predicted a wet spell in the region for five days and cautioned the administration to take adequate steps for the safety of people as services like water and power supply can be disrupted and landslides could block roads.

Himachal received 21 per cent excess rain during post-monsoon season from October 1 to November 30. The state received 58 mm average rain during the season against the normal rainfall of 47.8 mm, an excess of 21 per cent .