Elections not a solution to J&K issue: Mehbooba 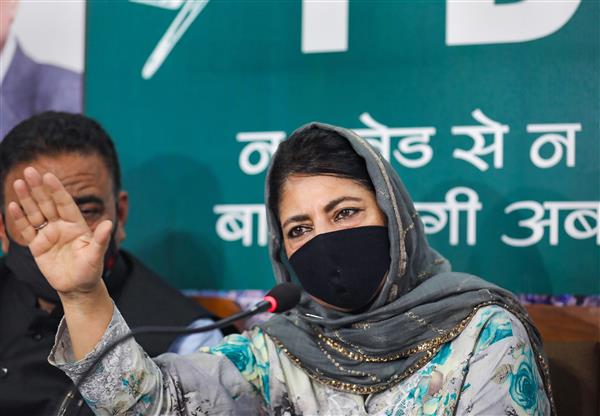 Peoples Democratic Party president Mehbooba Mufti said on Saturday elections have never been a solution to the Jammu and Kashmir issue, though they are important for addressing the basic needs of people.

She said her party is ready for the polls whenever they are held.

“Elections have never been a solution to the J-K issue. Elections, whether they take place today or tomorrow, will keep on happening. While they are important for addressing the basic needs of the people, they (elections) are not my priority. Whenever they take place, we are ready for that,” Mehbooba told reporters in north Kashmir’s Kupwara.

The Peoples Democratic Party (PDP) chief also accused the Centre of trying to divide the Muslim votes in Jammu and Kashmir by propping up new parties.

“The Centre is attempting to divide the majority community vote in J-K. The Congress is being split, people were taken out from the PDP, the NC and new parties were created. It is being done to disempower the people here, to reduce their power. But I am sure that the people of Kashmir are politically mature and they understand it,” she said.

Mehbooba has said several times in the past that she is not going to fight the assembly elections as her objective is to seek the restoration of Article 370 of the Constitution, which was abrogated by the BJP-led government in August 2019.

She said farmers through their peaceful protest made Prime Minister Narendra Modi repeal the three contentious farm laws and expressed hope that a day will come when the Centre will restore Jammu and Kashmir’s special status under Article 370 “along with interest”.

“Farmers protested peacefully for a year and secured their rights. Unfortunately, the people in J-K are not allowed to protest... There is jungle raj. But this will not remain as such.... A day will come when they (Centre) will have to give us back not only (Articles) 370 & 35-A, but along with interest,” she said.

She said the people of Jammu and Kashmir will continue their struggle till the time the special status is restored.

“It took BJP 70 years to revoke (Article) 370, so we will also struggle, be it for 70 days or 70 months, for the restoration of our identity, for the promise made by the country to our people which was enshrined in the Constitution. We will continue our struggle until Articles 370 and 35-A are restored and Kashmir issue is settled,” she said.

The PDP president said even when there was tension between India and Pakistan, the countries were engaged in some dialogue process.

“The Kartarpur Corridor has been reopened, did they not talk to Pakistan? There has been a ceasefire (along the Line of Control in J-K) for the past few months, so were there no talks with Pakistan? The NSAs (of the countries) talk to each other in other countries. Pakistan’s NSA was recently invited for talks on Afghanistan.

“But when we say it (talk to Pakistan), they get irritated. The talks are going on and (former PM A B) Vajpayee, who was their tallest leader, also did it. Nothing will happen without dialogue,” she said. — PTI