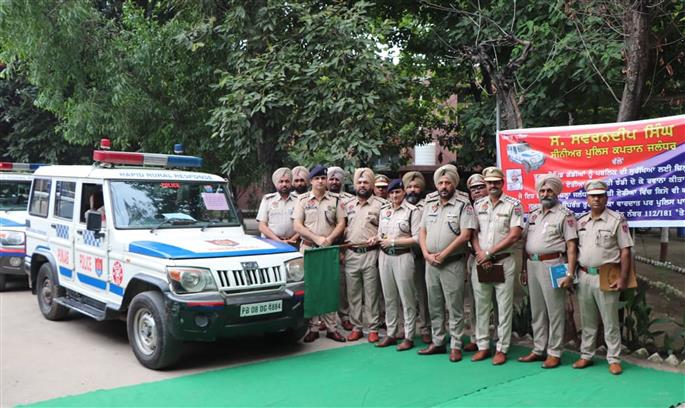 An upgrade to the Rural Rapid Response System being flagged off in Jalandhar on Friday. Malkiat Singh

An upgrade to the Rural Rapid Response System was flagged off by SSP, Rural, Swarandeep Singh in the district on Friday. All two-wheeler and four-wheeler vehicles being used by the rural police in Jalandhar will henceforth be fitted with GPS chips to ensure vehicle location tracking and speedy outreach to complainants in rural areas.

The upgrades to the Rural Rapid Response System involve such technological upgrades across 16 rural beats (each having a 10-15 km radius) each of which will have GPS-fitted vehicles to carry out patrolling. The rural police said the upgrades were for the convenience of the public and to ensure better law and order in the district.

Addressing on the occasion, the SSP said the entire district had been divided in beats so that a police party could be dispatched immediately in response to any calls or complaints being made to the police control room (telephone numbers 181 and 112). For this system, the vehicle locators will be equipped with new technology. The control room will also be provided with digital maps of the respective areas.

The SSP elaborated the detailed procedure, which will ensure fool-proof tracking and response to complaints. He said after a call was received in the centralised control room, the caller’s location would be ascertained and the operator deputed at the control room would send the location of the caller directly to the mobile screens of the nearby patrol party. The patrolling party would reach the destination immediately and take action, which will be brought to the notice of their senior officials.

The SSP Rural said, “All rural patrol vehicles in the 16 beats received upgrades today. These 16 beats cover the national and state highways as well. Similar technological upgrades will also be ensured in the control room gadgetry. A team of engineers will also be coming on Monday to oversee the same.”

The police said the aim of the system was to promptly redress people’s complaints, to instil self-confidence among citizens, keep anti-social elements at bay and to ensure 24x7 security of rural areas.