Victim’s hands, feet found tied with rope | Was to go to Canada on Sept 25 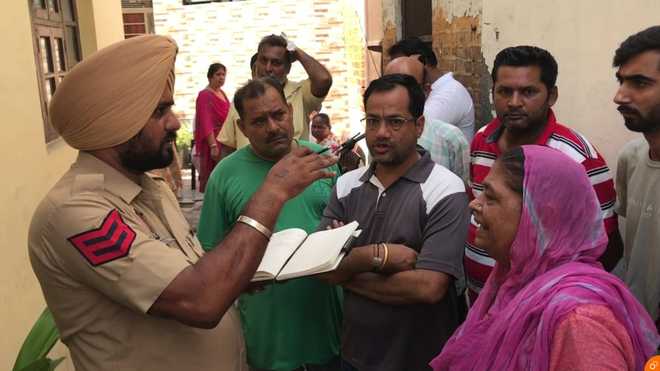 Cops conduct probe at a house in Khanna where the elderly woman was murdered on Wednesday.

A 75-year-old woman, Surinder Kaur, was found murdered at Ahluwalia Mohalla, Khanna, on Wednesday. Before being strangled, the woman’s hands and feet were tied with a rope by the killers.

The incident came to light when the domestic help reached home and found the woman lying dead on a chair.

In the preliminary investigation, the police suspected that the murder could be committed by some known persons and some of the suspects were also rounded up by the police for questioning. The nephew of the deceased, Harinder Singh, said his aunt had to go to Canada to meet her son on September 25 and her ticket and visa had already arrived. The deceased had come from Canada last year but due to Covid, she got stuck in India.

He added that his aunt Surinder was living alone in the house as her one son was living in Canada and another in a separate house in Khanna.

“My aunt had no enmity with anyone. Last night she also attended Ganpati festival in the locality and she returned home late night. It could be possible that she was killed on Tuesday night or on Wednesday morning. The police should check CCTV footage of the area to get clue about the killers,” said Harinder.

After the incident came to the fore, police teams, led by Superintendent of Police Manpreet Singh and DSP Rajan Parminder Singh, reached the spot. Dog squad and fingerprint experts also reached the spot.

The police suspect that robbery could also be the cause behind murder as the entire house was also ransacked. One of the woman’s acquaintances was reportedly also being questioned but the police have so far failed to reach any conclusion. Property dispute angle is also being enquired by the police. Last call details of the woman were also being scanned by the police to get clue.

DSP Rajan Parminder said police investigation is on from various angles and nothing could be said at this moment.