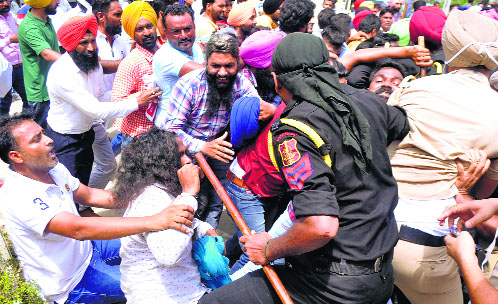 Members of the Berozegar Sanjha Morcha clash with the police in Patiala on Saturday. Tribune photo: Rajesh Sachar

Members of the Berozegar Sanjha Morcha clashed with the police at the YPS roundabout after they were stopped from moving towards the Chief Minister’s residence here today.

During the face off, turbans of various protesters were tossed aside as the police used mild force to contain the agitating Sanjha Morcha members.

After the clash, protesters staged a sit-in at the YPS roundabout.

The protesters said the government had failed to provide jobs to the qualified youth of Punjab despite tall claims of employment made by Chief Minister Captain Amarinder Singh.

“The qualified youth are protesting on roads but the Chief Minister is not bothered to meet us. Instead of getting appointment letters, we have been facing police brutality,” said Sukhwinder.

The protesters called off the stir after they were assured of a meeting with the Chief Principal Secretary to the Chief Minister, Education Minister Vijay Inder Singla, and Health Minister Balbir Sidhu on August 3.