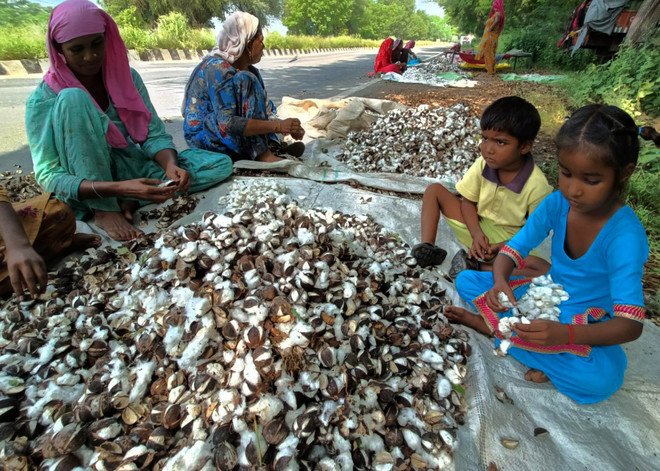 The ongoing protest against the three farm laws and damaged cotton crops hint at a lacklustre Diwali in the agricultural heartland of the Malwa region this year.

The delay in receiving compensation for the damaged crop has worsened farmers’ debt due to which financiers are unwilling to advance new loans to them, making any new purchase this Diwali difficult. The rural income scenario is in many ways representative of the mood in Punjab’s economy, but farmers have been battling for compensation and repeal of the three farm laws.

BKU Ekta Ugrahan’s Shingara Singh Mann said: “This year, it’s ‘black’ Diwali for us as we are still protesting at the Delhi borders. It has been 11 months and around 600 people have died so far. The state government is not giving adequate compensation for the damaged cotton, so our protests at all places will continue on Diwali as well.”

Amit Kapoor, president, Punjab Beopar Mandal, said: “All shopkeepers are worried as they are witnessing a major slump in their business. Buyers are not spending money. In fact, they do not have the money to spend. Traders are facing double whammy as farmers are not making many purchases due to crop loss and other buyers have been lured away by huge discounts offered by e-commerce giants.”

He said every year, shopkeepers used to wait for the festival season in the hope of more sale. “We sincerely hope the market will improve in the coming days. Otherwise, it will be very difficult for businessmen to sustain in the present scenario,” he said.

Sanjay Kumar, a wholesale dealer, said every year during the festival season, farmers borrowed money from arhtiyas in advance or had money after selling their crops, which they spent on purchase. “However, this time, due to protests and crop loss, farmers have vanished from the market,” he said, adding: “The arhtiyas are also not ready to give money to farmers whose crops have been damaged as their account has turned into bad debt. Even lenders seem to have disappeared from the market.”