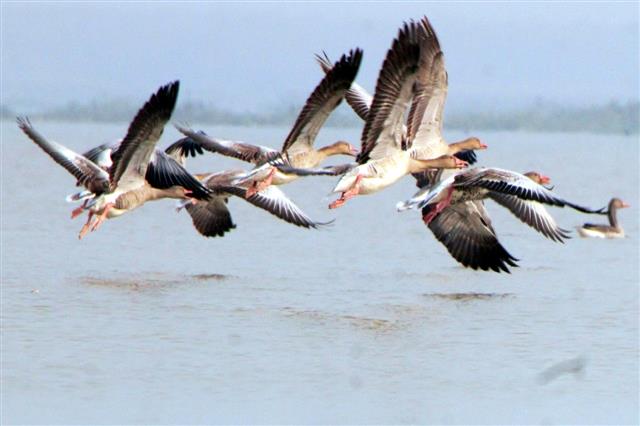 With the advent of winter, birds through the Central Asian Flyway have started converging in a number of clusters at Harike, India’s second largest wetland, in Tarn Taran district.

The winged guests are expected to stay at the wetland till March.

The WWF, Wildlife and the Forest Department, which oversee the wetland, have started the process to conduct a study and make arrangements to prevent poaching incidents.

Gitanjali Kanwar, coordinator, Aquatic Biodiversity, WWF (India), said around 60 species of birds migrate from around 33 countries of Europe and Eurasia.

Kamaljit Singh, Harike Range Officer of Forest Department, said adequate arrangements had been made to facilitate bird lovers and ensure security of the winged guests.

“Our teams are vigilant round the clock and patrolling to keep a check on poaching. We also keep a close watch on the behaviour of migratory birds. For bird watchers, there are bird hide shelters to observe the birds at close quarters, besides the usual watch towers. We have adequately arranged binoculars for them,” he said.

A total of around 90 species of birds find abode at Harike lake, including the migratory ones.

The wetland and the lake were formed by constructing headwork across the Sutlej in 1953. Since then, the wetland, spread about 41 sq km, has become a favourite destination among rare varieties of avifauna.