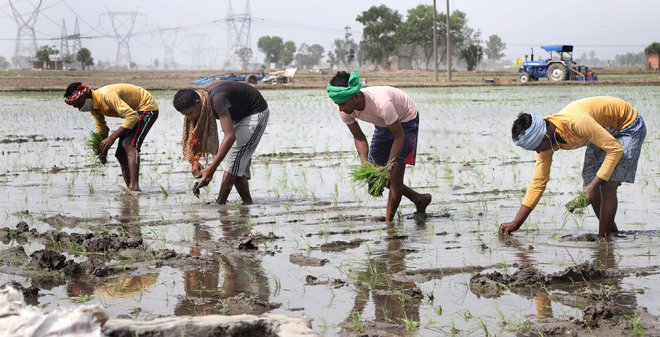 Farm labourers plant paddy seedlings in a field at a village in Jalandhar on Thursday. Photo: Sarabjit Singh

A day after the Punjab State Power Corporation Limited (PSPCL) claimed it anticipated “to meet more than 13,000 MW demand during the paddy season”, many parts of ‘power-surplus Punjab’, including villages and paddy fields, faced major supply interruptions on the first day of the paddy season today.

In many villages, farmers claimed they did not even get five hours of power for their paddy fields as against the promised eight-hour uninterrupted supply.

According to senior PSPCL officials, the demand of power already touched 11,506 MW on day one of the paddy season around 11 am. Many areas had unscheduled power cuts and in some villages, farmers claimed they got only six hours for fields while their residences were also without power during the day.

Information gathered from PSPCL officials confirmed that the power demand touched another high of 11,787 MW on June 10 around 5.15 pm. In Patiala, Mohali, Sangrur, Amritsar, Fatehgarh Sahib and Ludhiana villages, the supply to fields was interrupted. While in Patiala unscheduled power cuts were reported in many areas on Wednesday evening, Zirakpur had over seven hours of unscheduled power cuts.

Farm unions alleged despite many meetings with the PSPCL top brass pertaining to power availability and an eight-hour uninterrupted power supply, preferably at a stretch, the PSPCL failed on the first day itself. “Some villages got just five-hour power supply, while in majority, it was two hours of supply and then some snag was reported. We cannot wake up early morning and then be awake the whole night again to manage our fields in the absence of regular supply,” they said.

While the PSPCL top brass says it was due to overloading of transformers and scorching heat, the PSEB Engineers’ Association claims the whole system was overloaded and many critical transformers and other material were in short supply which led to sudden outages in Punjab.

PSPCL CMD A Venu Prasad said “there was failure of transformers in many parts of the state due to overloading and no power cuts were imposed”. “Power is fully tied up. Our staff are working hard to resolve complaints on priority,” he said.

The PSEB Engineers’ Association, in another letter to the management, claimed, “The management has failed in timely decision-making for ensuring sufficient procurement of material and is now resorting to untested arrangements, which in the long run will only harm the power infrastructure.”

However, the PSPCL management claims ample stock of material was available to meet any exigency for June and on-the-spot procurement was allowed to field staff.

Meanwhile, hundreds of residents in Sirhind barged into the PSPCL office last night as the official on duty was not responding to their calls being made to lodge complaints to restore the supply.

Farm unions alleged despite several meetings with the PSPCL top brass on an eight-hour uninterrupted power supply, there seemed no preparedness. “Some villages got just five-hour power supply, while in majority, it was two hours of supply and then some snag was reported,” farmers said.

Chief Minister Capt Amarinder Singh directed A Venu Prasad, CMD, PSPCL, to ensure eight-hour interrupted power supply to farmers during the ongoing paddy sowing season. At the same time, he said the domestic power supply should also not be affected in view of summer season.