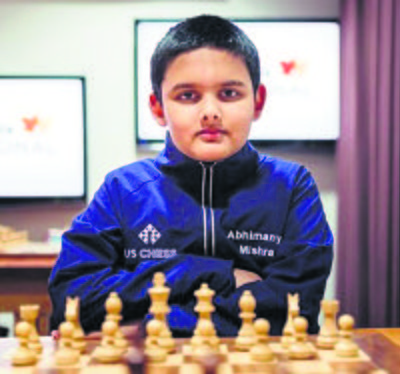 Abhimanyu Mishra, who has become the youngest Grandmaster in the history of chess, has been marked out as a special talent for years, but funding has been a problem. As his father Hemant, a data management professional, used his savings to fund his son’s chess ambitions, they turned to crowdsourcing to raise money: Their appeal on gofundme.com has already raised $16,243, and the donors would be happy with what the youngster has achieved.

In late 2019, just a couple of months before the Covid-19 pandemic struck, Mishra became an International Master at 10 years, nine months and three days. Mishra, who was only two-and-a-half-years old when introduced to chess by his father, broke the record of the current U18 world champion Praggnanandhaa Rameshbabu by 17 days.

Now the race was on to become the youngest Grandmaster — he had until September 5 this year to break the record of Russia’s Sergey Karjakin, who became a GM at 12 years and seven months.

On Wednesday, the New Jersey boy won the race when he secured his third GM norm in Budapest, having already crossed the required 2,500 ELO rating mark. Mishra became the youngest GM ever at 12 years, four months and 25 days. — TNS, agencies