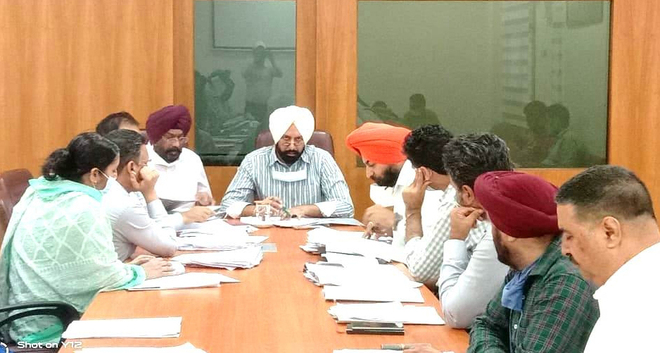 Mayor Karamjit Singh Rintu during a meeting with MC officials in Amritsar on Saturday. Tribune photo

A meeting of the Finance and Contract Committee of the Municipal Corporation was held under the chairmanship of Mayor Karamjit Singh at the head office in Ranjit Avenue here on Saturday.

Apart from this, a resolution was also passed in the meeting to conduct third-party audit of all development works carried out by the MC.

The development works of the operation and maintenance (O&M) wing, civil wing, street light wing and health wing in all wards of the city was approved, which included installation of new tubewells, laying of drinking water supply lines to prevent leakage of water, de-silting of sewerage in various parts of the city for smooth operation of sewerage, construction of manhole chambers and levelling and repair of sewerage cover below the level of roads.

Deputy Mayor Younas Kumar said his objection raised during the last meeting on September 8 was again ignored. He refused to mark his attendance in protest.